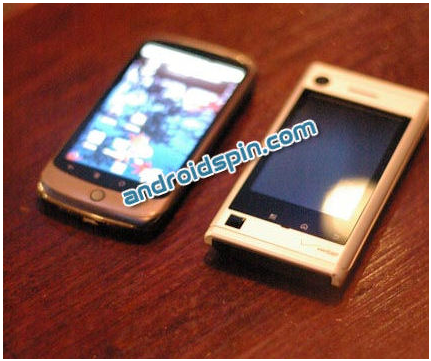 Well that didn’t take too long at all. Just this morning, the Motorola DEVOUR with MOTOBLUR was announced, and now in-the-wild pics and hands on impressions are surfacing on the web. Pictured next to the Nexus One, the DEVOUR looks much smaller than it does in press images. So how does it feel and what can be expected from the device?

It was hard to tell from prevoius leaked images and from the press pics, but the DEVOUR pictured above is made of metal. It’s hard to say whether the final release product will be the same, but we sure hope so. AndroidSPIN, the folks that got hold of the device, says “it feels very solid.” Judging from the image above, the DEVOUR is going to be relatively chunky (compared to slimmer devices like the Nexus One or HTC Hero), but the screen is significantly smaller.

It’s also rumored that Motorola will be launching future devices with infrared to control home media devices, such as Blu-ray players, and that some of their future gadgets are like “nothing we’ve ever seen.” We like the direction Motorola is taking with its handsets, but we’re not going to get too excited until we see the coming line-up.