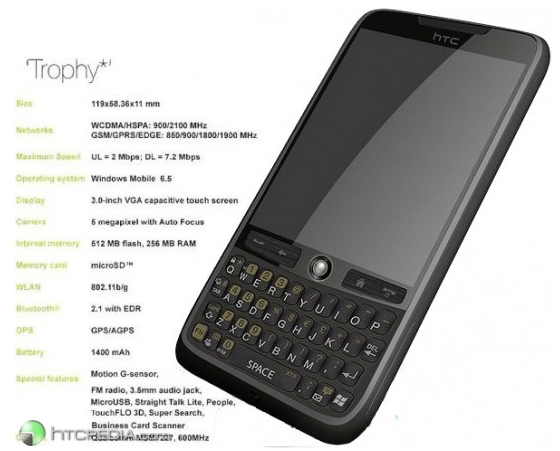 When the HTC Trophy made its first appearance on that leaked 2010 roadmap back in early December, we said that it looked like a T-Mobile HTC Dash with a touchscreen.

Now that we’ve got a clearer picture and a bunch more specs on it, however, it looks more like a… well, a T-Mobile HTC Dash with a touchscreen.

I’m not sure if HTC’s even trying to keep this one a secret, considering just how leaky these pipes seem to be. We know just about everything there is to know about the handset at this point, and it’s not even scheduled to launch until May.

What we know about the specs:

The specs and form factor aren’t too mindbogglingly exciting, so I don’t expect that this device will pull over too many folks who aren’t already fans of (or are required for work purposes to use) WinMo 6.5. That’s okay though – considering that it packs “Business card scanner” as a feature, it sounds like this one is aimed squarely at the enterprise crowd anyway.

Update: Looks like the shot above is a fan-made (though still awesome) render.