Since its inception about a year ago, SCT has established itself as the major monthly event for Ukrainian startups, and a steadily growing audience of each new SCT event testifies to the growing popularity of SCT with Ukrainian tech entrepreneurs and angel/VC investors. A further evidence of the SCT model success and popularity is its spread to Russia, were the first SCT event will be held on February 6 in Saint Petersburg. 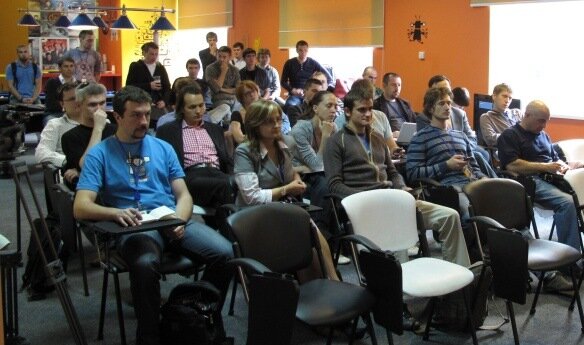 About 1,000 startup professionals and investors have attended SCT events at least two times, with the core audience numbering about 300 people. The number of attendees has been growing at +20% each month. The latest SCT event gathered the record number of 230 attendees. Among those attending were representatives of 12 VC funds and more than 10 angel investors.

The panel discussion at the 10th SCT event was dedicated to all issues related to fundraising by startups. The panelists were representatives of the leading investment funds operating in Ukraine, such as Kvazar Micro, Vivex Invest, eVentures Capital Partners, Decarta Capital, and P&S Group.

The panel discussion was followed by presentations/pitches of six startups, including three regular 15-min. presentations and three 90-sec. “flash” pitches. According to the audience response, the best presentation was made by Kabanchi.

The “flash” pitches were assessed by votes from the audience and the flash pitch which got the largest number of votes will be provided with an opportunity to make a regular presentation at the next event, which will take place on February 26.