2009 was a good year for Meebo, which saw its Meebo Bar spread to over 130 partner sites. The chat bar, which also makes it easy to share content, now reaches 110 million unique visitors according to Quantcast (74 million according to comScore), and is growing at a clip pace. But not everything has gone exactly according to plan — on certain sites, the chat bar isn’t being used as much as Meebo would hope. Now the company is looking to change that by modifying the way it authenticates users. Starting later this week, you will no longer need to sign up for a Meebo account to access all of the Meebo Bar’s features — you’ll be able to enter your credentials for services like AIM, Google Talk, and Facebook Chat and use all of the functionality immediately.

I spoke with Meebo Senior Director of Product Chris Szeto and Director of Business Development Daniel Bernstein about the changes. They say that one big misconception people have about the Meebo Bar is that while it has a very broad reach, that doesn’t necessarily mean a lot of people are using it — people who visit a partner site see the bar even if they never touch it. The Meebo team says that engagement is higher than you might expect, and that 32% of its users are authenticated. But that stat comes with one big caveat: up until now, the majority of authenticated users have been on sites like MyYearbook and Justin.TV, which already have their own authentication systems in place. In other words, publisher sites that don’t already have their own social graphs haven’t been seeing the chat feature get much traction. Meebo is hoping today’s changes will fix that. 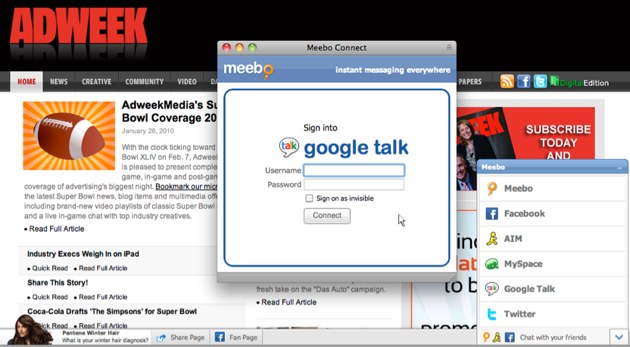 The problem so far has stemmed from the way Meebo prompts users to start using the service. If you go to MyYearbook and sign in as usual, you’ll see your MyYearbook friends show up in you Meebo Bar buddy list. If you go to a publisher site that doesn’t have a friend system already, Meebo will still let you chat through third party services like Facebook Chat and Google Talk. But up until now, in order to do that you’d have to first sign up for a Meebo account. Only after that was done would Meebo let you start using AIM, Facebook Chat, Google Talk, and the others. But most people didn’t make it past the first hurdle of signing up for a Meebo account — why sign up for a new account just to access the ones you already have?

With today’s change, Meebo is getting rid of that hurdle. Now you’ll be able to enter the credentials of whatever service you want to start using from the get-go. Meebo will lose out slightly because it will no longer be getting people to sign up for its own Meebo accounts, but few people were signing up for them anyway so they’re not missing out on much. The plus side for Meebo is that they’ll likely see their authenticated user stats increase even further.  When a user is authenticated with the Meebo Bar, it means that they’ve logged in and Meebo is presenting them with a list of their chat buddies, which makes it one metric to measure engagement. Even if a user doesn’t start chatting, Meebo benefits from having an authenticated user because it learns some key demographic information, like age and gender (which it can use to serve better ads). Obviously it’s in their interest to get more people authenticated and chatting.

I think this will help the Meebo Bar on publisher sites, but engagement on these sites will still trail the social networks Meebo is integrated with.  On community sites that already have established social graphs, there’s an inherent sense of community that prompts chatting and sharing that you may not get from a standalone publisher site. Users may eventually get used to the idea that nearly every site can be social, but it will take time.

Update: Meebo points out that while the authentication stats for publishers have been low, they’ve still seen “very good” share activity through Facebook, Twitter and other services (you have never needed a Meebo account for these).