Looking to turn your PC into a live video production studio? Ustream has just launched a new desktop application to help make that happen. Today, the company is launching a new desktop client called Ustream Producer that boasts high video quality and editing tools that can help give your streams an added layer of polish. The application is available for both Mac and PC, and you can grab it here.

Now, you’ve always been able to broadcast to Ustream via your web browser, which uses Flash to access you PC’s webcam. But Ustream says that the desktop client offers both increased video quality (you can stream in HD and H.264), and perhaps more importantly, it allows you to create broadcasts that can be far more complex than just a single stream from your webcam. The application includes support for Picture In Picture, which means you simultaneously show two streams at the same time. The premium version of the app lets you use multiple cameras from the same setup, while the free version lets you include additional Ustream streams that are being broadcast from other computers. You can also integrate previously recorded video, and share your desktop screen.

Ustream is offering a free version of the producer, which includes more than enough features for casual broadcasters. But if you’re looking to make your broadcasts look more professional, complete with graphic overlays and multiple camera angles, you’ll want the premium version, which costs $199.

This isn’t the only way to broadcast live video from your desktop, though. Competitor LiveStream has offered a similar production tool called Procaster since last April. And there are third party applications like Wirecast that allow you to stream to multiple livestreaming services, like Justin.tv, Livestream.com, and Ustream.

If you’re looking to get a feel for what can be done with the new software, the company says that Trace Cyrus and Mason Musso will be using it to broadcast a new song from the Alice in Wonderland soundtrack tomorrow at 4PM here. 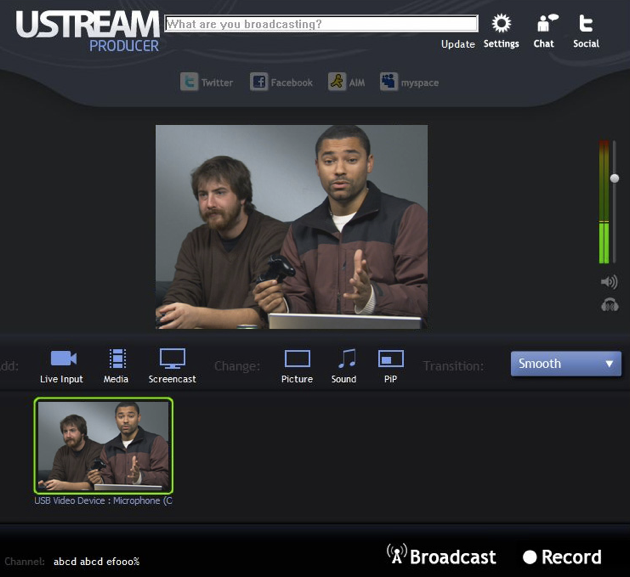