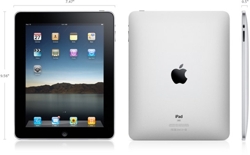 Perhaps Apple was just being extremely careful not to draw any attention to the widely speculated name of its new multimedia device prior to this morning’s announcement, but one simply cannot overlook the fact that the company doesn’t have ownership over any domain names related to ‘iPad’.

For now, that is.

Apple does not own iPad.com, as you may have noticed. Others have, in any case, and some even suggest that the person who registered the domain name (one Martine Bejasa) sell it to the Cupertino company to become an instant millionaire. Unlikely to happen, IMHO.

They also don’t own iBook.com, iBooks.com or iBookstore.com or anything like that, in case you were wondering.

It’s not that Apple doesn’t care about domain names. It paid heavily for iPhone.com back in 2007, and it owns iPod.com, iMac.com, iWork.com, iTunes.com etc. (but not MacBook.com, curiously). Run a search on UDRPsearch and you will find that Apple regularly fights to (re)gain control over relevant domain names that carry one of their trademarks – which it doesn’t have for ‘iPad’ (yet), just to be clear.

Just a couple of weeks ago, Apple moved to seize 16 domain names from a single individual. There’s no doubt in my mind that they’re going to be aggressively targeting the owners of the domain names listed above, once they secure or license use of the ‘iPad’ trademark.

Update: just to be clear, I’m aware that getting the iPad trademark does not guarantee that Apple will be able to take away the domain names from their current owners. But they’ll most certainly try and succeed with some, depending on what the owners do with the domain name. I’d also like to point out domain names like AppleiPad.com, AppleiPad.net, AppleiPad.info and so on are also not in Apple’s possession at this point.