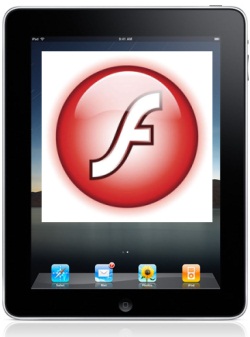 While Apple is being lamented here and there for not supporting Flash on its shiny new iPad – boy does Cupertino have a strong dislike for the platform – Adobe has already responded to the news on the official Flash Platform blog.

The blog post, unambiguously titled “Building iPad Applications with Flash”, is mostly just to remind people of the company’s Packager for iPhone product, which will enable developers to make Flash apps function on the iPhone / iPod Touch through a work-around whereby Flash apps can be easily converted into iPhone apps using Creative Suite 5 (CS5). Adobe also published a post on its Adobe Flash Platform blog addressing the apparent lack of Flash support in the iPad.

We’ve written before that this could turn 2010 into the year when approximately 2 million Flash developers could potentially start cooking up stuff for the iPhone en masse. You can now add the iPad to that, it seems.

For that latter part, Adobe points to this article by Christian Cantrell, Product Manager and Application Developer on the AIR team. The article goes in depth about how developers can build apps using Flash with authoring with multiple screen sizes and resolutions in mind.

You won’t be able to fire up, say, Hulu through your browser on the iPhone or iPad any time soon, but Adobe appears determined to show the world that Flash has its place on Apple’s products one way or the other.

And it’s also sending a message to Flash developers that they can and should stick to the platform rather than look at other ways to join the App Store goldrush.