Big news for doubleTwist, the iTunes alternative that allows you to manage media for hundreds of devices, including Android phones, the Palm Pre, and BlackBerry. Tomorrow, the company will announce that it has forged a partnership with T-Mobile, which is now promoting it as the supported way to sync media to its line of Android phones. As part of the deal, T-Mobile will begin displaying doubleTwist banners in their retail stores and on T-Mobile.com. And perhaps most important, doubleTwist will come pre-installed on some Android devices, including the new Fender/Eric Clapton myTouch 3G handset.

For those that haven’t used it before, doubleTwist is a media management program that’s both visually and functionally similar to iTunes in many respects, but with one big difference: it will work with nearly any device (iTunes only plays nice with iPods and iPhones). You can drag and drop songs to playlists, sync music, photos, and video to your devices, and share your media with friends using integrated Facebook and Flickr support. In effect, doubleTwist can serve as an “iTunes for Android”. The software is impressive in its own right, but the company has also gotten quite a bit of attention because it was co-founded by DVD Jon, who serves as CTO.

This is a smart move by T-Mobile. One of the most jarring experiences when moving to an Android phone is figuring out how to sync media to the device. First, you have to manually mount the SD drive from the phone’s screen. Once that’s done, you may find yourself half-expecting iTunes to cheerily pop up to help transfer your media, but nothing happens — it’s up to you to drag and drop media from your computer to the appropriate folder on the phone. There are plenty of applications out there meant to help you do this, but it’s a poor experience for users who are trying the platform out for the first time. doubleTwist makes this much easier for new Android owners (it even shows you how to mount the SD card). It may not be quite as robust as iTunes, but it’s going to be good enough for most people. If this proves to be successful for T-Mobile, it wouldn’t surprise me if doubleTwist was adopted by other carriers as well. 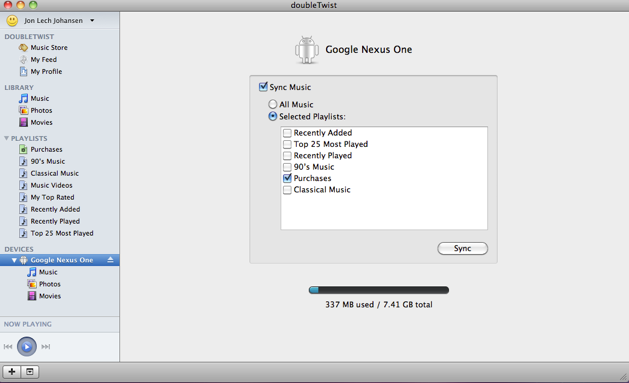 One downside to the T-Mobile version of doubleTwist is that it’s missing one of the app’s best features: integration with Amazon’s MP3 Store. The feature, which launched in October, allows users to purchase music from directly within doubleTwist, much as you would with iTunes. doubleTwist wouldn’t comment on why T-Mobile decided to omit the feature, but the company is planning to further expand the software, so hopefully it’s in the pipeline. In any case, you can still download the fully featured version at doubleTwist.com.

Money is changing hands in the deal. Co-founder Monique Farantzos declined to comment on any specifics, but says that doubleTwist licensed its software to T-Mobile and that it’s a “significant source of revenue”. We should also note that while it was previously known that doubleTwist would come preloaded on the Fender myTouch phone, the full extent of the partnership hadn’t been announced before now.

doubleTwist isn’t the only company looking to establish itself as a viable alternative to iTunes. Earlier this month Songbird, an open-source media player/browser hybrid landed a deal with Philips to come bundled with some of its MP3 player devices. 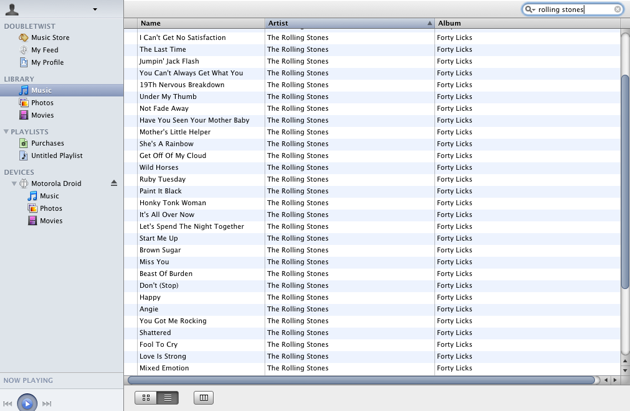