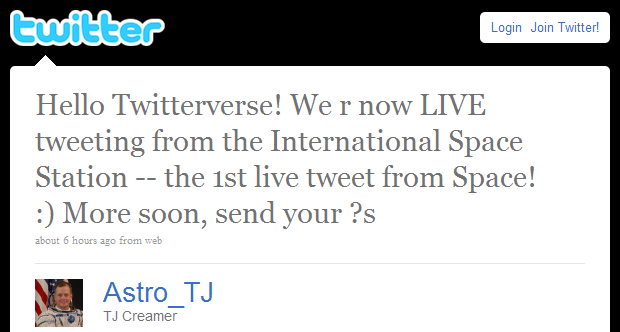 Astronauts aboard the ISS received a special software upgrade earlier this week, according to a NASA statement released moments ago: personal access to the Internet and the World Wide Web via the “ultimate wireless connection”.

This personal Web access, called the Crew Support LAN, takes advantage of existing communication links to and from the station and gives astronauts the ability to browse and use the Web. The system basically provides astronauts with direct private communications.

Flight Engineer T.J. Creamer made first use of the new system Friday, when he posted the first unassisted update to his Twitter account from the space station.

Previous tweets from space had to be e-mailed to the ground where support personnel posted them to the astronauts’ Twitter accounts.

What’s the coolest place (pun intented) you’ve ever tweeted from?