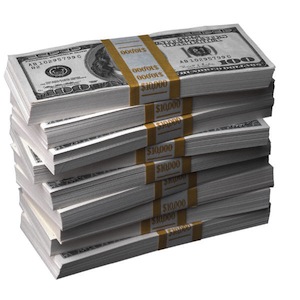 Google co-founders Larry Page and Sergey Brin plan to steadily sell off up to 10 million shares of stock over the next five years, according to an SEC filing. At today’s closing price of $550, those shares would be worth $5.5 billion if sold immediately. Although the two co-founders hold Class B shares with super-voting rights, if they sell all 5 million shares, their voting control will drop from 59 percent today to 48 percent. From the filing:

They would continue to be the largest shareholders, but would not be able to control the outcome of any shareholder vote as they do today. They, of course, could decide to stop selling just short of losing control. They also could probably find the other 2 percent of votes if they ever need it from CEO Eric Schmidt or a collection of other Google employees and loyal investors.

The two have not yet started selling shares under the plan, but it is common for tech founders to diversify their holdings in this manner. Bill Gates and Salesforce CEO Marc Benioff, for instance, sold stock of the companies they founded under similar plans. By selling at regular intervals, they get to cash out and diversify their holdings without spooking investors with sudden sales.