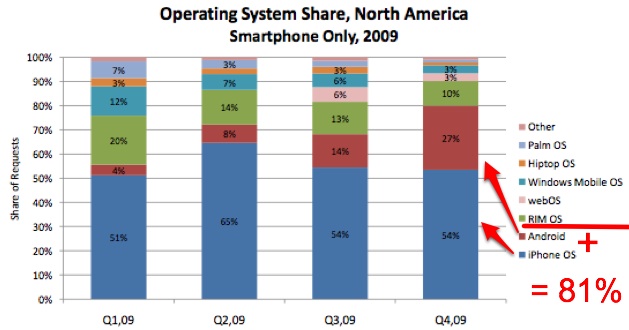 When it comes to the mobile Web, increasingly there are only two mobile platforms that matter: Apple’s iPhone and Google’s Android. According to market share data put out today by AdMob (which is being acquired by Google), the iPhone and Android combined captured 81 percent of U.S. mobile ad impressions on smartphones in the fourth quarter of 2009, up from a combined 55 percent in the first quarter of 2009.  Most of that growth comes from Android, which nearly doubled its market share from the third quarter to 27 percent.  The iPhone OS made up the other 54 percent. (Worldwide, the iPhone had 51 percent share and Android had 16 percent, for a combined total of 67 percent).

Back in the first quarter of 2009, Android only had a 4 percent share of mobile ad impressions (which is also a decent proxy for overall mobile Web and app usage).  It took a lot of share from Blackberry, which went from 20 percent to 10 percent over the past year, and Windows Mobile, which went from 12 percent to 3 percent.  And Palm, which Android passed long ago, is barely a rounding error now, compared to its 7 percent share a year ago.  During all of this time, not only has the combined market share of Android and iPhone been growing, but so has overall mobile Web traffic. In North America alone, mobile Web traffic has doubled in the past year.

Increasingly this looks like a two-horse race between iPhone and Android, and all the other mobile phones don’t matter.  No wonder Google only cares about targeting mobile ads to those two platforms.