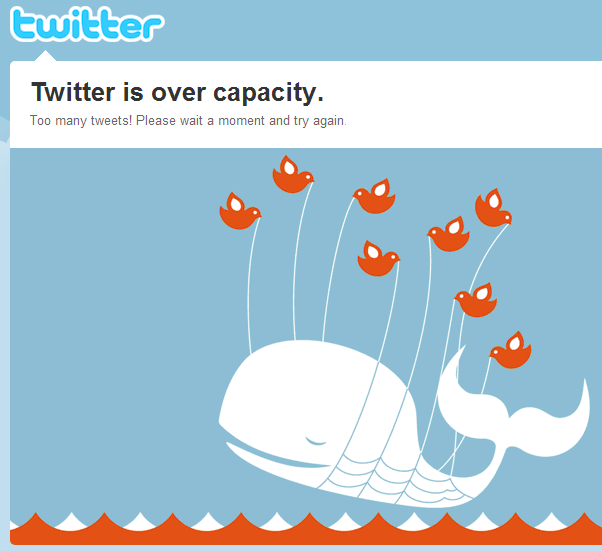 Just yesterday I wrote about a new service called API-Status.com that monitors the availability of 26 popular APIs, and today it’s already proven useful for me. The Twitter API is down, causing thousands of third-party apps and services to malfunction.

Of course, a simple visit to Twitter.com would also teach you that the service is broken, because as of approximately 6:40AM Eastern Time people are unable to access the site because of ‘too many tweets’. In other words: welcome back, fail whale.

For what it’s worth, according to Pingdom Twitter was having a nice run this month, with a registered uptime of 99.89% in January 2010 so far.

I’m thinking Bill Gates could have something to do with it.

At this moment, there isn’t any mention of the service disruption on the Twitter Status site yet, so we’re left wondering when the service is expected to come back up. In the meantime, go check out our 15 alternative things to do when Twitter is down post.

Update: at 7:25AM EST, Twitter updated its status blog:

We are experiencing an outage due to an extremely high number of whales. Our on-call team is working on a fix.

(As commenters are pointing out, the news that a second earthquake just hit Haiti likely resulted in a flurry of tweets and retweets about the subject, and Twitter may not have been able to handle that sudden load.)

And don’t forget to retweet this post. You know, later.