I had just turned sixteen when instant messaging client ICQ was first released in November 1996. I started using the program a couple of months later, and will never be able to erase that annoying ‘uh oh’ sound from my memory. Like many others, I moved on from ICQ to other, more feature-packed communication services at the dawn of the new millennium and never really looked back.

After a decade of barely remembering it exists, I reinstalled the ICQ client on my computer this morning.

The reason isn’t nostalgia: more than 13 years after its first release, and nearly 12 years after Aol bought the company behind ICQ (Mirabilis) for a whopping $407 million, there is an updated client available for download that finally brings the product into the era of the realtime web and social networking craze.

The question is: is it too little, too late?

ICQ7, the latest iteration of the Internet communication product, is now a desktop client that does much more than instant messaging, and in fact will compete with the likes of Seesmic and TweetDeck as well as web-based aggregators like Meebo and eBuddy.

New tabs brings streams from these networks to the messenger client, and you can interact with your friends and content from inside the client to boot. Furthermore, status updates shared on ICQ can now be pushed to a wide variety of networks, in essence replicating functionality we know from Ping.fm (recently acquired by Seesmic) and HelloTxT.

The ICQ client, which is only available for Windows for now, has also been given a new lick of paint and is supposed to take less space and run much faster. The new version also includes a couple of new options aside from the social network integration, such as advanced picture-sharing functionality and the ability to extend your user profile.

Frankly, I think all these features are long overdue, and I doubt there’s any compelling reason for people to switch back to ICQ if they’re already happily using alternative aggregators or content with updating each social network individually. That said, the additions are nice for existing ICQ users, of which there are currently 42 million worldwide according to the press release (although I don’t know a soul who’s still on it).

ICQ has been rumored to be up for sale for a while now, and we heard Aol has been talking to Google, Facebook investor Digital Sky Technologies and Naspers recently. 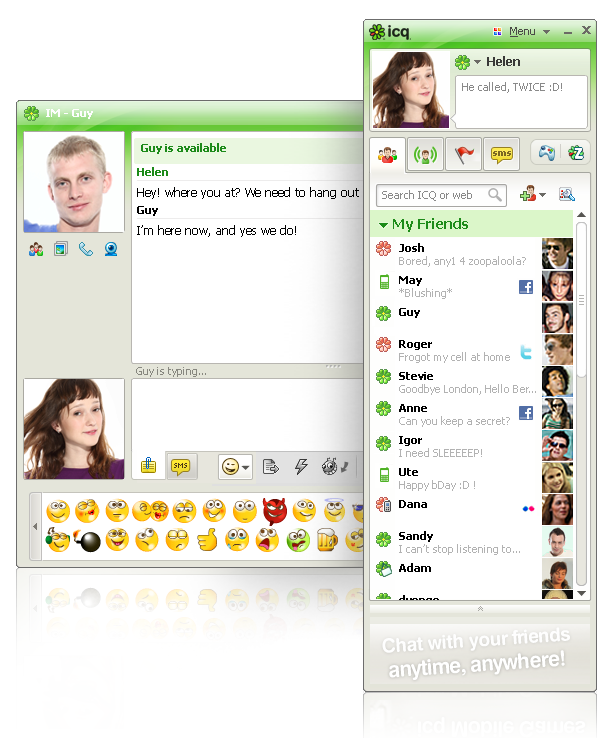