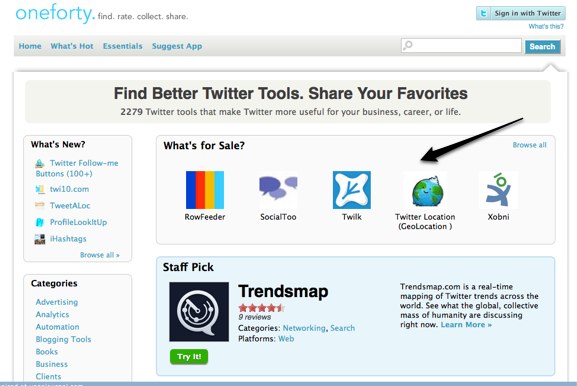 There’s no doubt that Twitter has managed to create a vibrant ecosystem of third party apps and services around its microblogging platform. When we wrote about oneforty, a social app directory for all things Twitter, last year, the startup’s founder and CEO, Laura Fitton, hinted at the eventual roll-out of an e-commerce marketplace where third-party developers can sell their apps. Last week, we broke the news of the imminent launch of the marketplace and today, the e-commerce platform is officially being launched.

Effective today, developers can integrate with oneforty’s e-commerce tools to sell apps directly through the site. Developers must sell at a minimum price of $0.99, and oneforty will take a 25% commission from each sale. Apps that are sold above a certain price ($14.50) will have their commission fees dropped to 20%. The payments system will be powered by PayPal. Apps for sale will be featured prominently on oneforty’s home page, allowing developers greater visibility if they are participating in the marketplace. Fitton says that the marketplace is still a work in progress, and is still very much an alpha test to see what developers need and want from the platform.

As of today, there are 117 apps available for purchase on oneforty out of 2300 apps, services and clients listed on the directory. Those who are participating in the e-commerce platform include Socialtoo and Twilk. Developers can also sell their apps on multiple sites; oneforty isn’t demanding that developers only sell on their platform. Oneforty also collects affiliate fees (5%) from apps listed on the iPhone app store.

So, not only does the site fill a gap in the Twitter ecosystem but it also has a definitive monetization plan, which is a challenge in itself. Combined with the launch of the e-commerce platform is the announcement of the startup’s series A round of funding, which we wrote about here. Oneforty has raised $1.9 million in funding led by Flybridge Capital Partners with Javelin Venture Partners, Dave McClure, Roger Ehrenberg, Andy Sack and others participating. The funding will fuel new hiring and accelerate platform development. Oneforty has raised a total of $2.25 million in funding, including seed and angel funding.

Oneforty, which was part of the Boston Techstars Class of 2009, has an attractive platform, which was why shortly after its launch, rumors started flying about Twitter looking into buying the service. Fitton declined to comment on these acquisition rumors but there’s no doubt that the platform is sure to have caught the interest of Twitter, at least as an attractive off shoot of the microblogging service.