The line between online security and reputation is blurring. ReputationDefender is a new kind of online security startup that helps you monitor your reputation on the Web and take actions to make sure that when someone Googles you they see you in the best possible light. Last year, ReputationDefender raised $8.65 million from Bessemer Venture Partners and Kleiner Perkins, which it is announcing today. The round came in two tranches, with $4 million form Bessemer in May, 2009 and another $4.65 million from Kleiner in August, 2009, with Bessemer participating again. David Cowan of Bessemer and Ted Schlein of Kleiner now have board seats, along with angel investor Mike Maples who led the Series A in 2008.

ReputationDefender sells four different security products on a monthly subscription basis (MyReputation, MyPrivacy, MyChild, and MyEdge) which lets you monitor information about you across the Web, as well as in semi-private databases, and helps you remove inaccurate information or counter by promoting your own vetted profile. CEO Michael Fertik thinks “we are entering a third phase of digital security.” The first phase was around protecting your devices from viruses and malware. The second was around financial payments and making sure people are who they claim to be. “Now we have a third phase,” he says. “Your whole life is on the Web. You live, work, date on the Web. Nobody has your back yet. Nobody gives you the tools to control your life on the Internet.”

Privacy might be dead, but that doesn’t mean you can’t do anything about it. “Information security has to evolve form protecting hard drives to protecting identities,” says Cowan. ReputationDefender specializes in recursive search. It doesn’t just do a search on your name. It will match your name to your employer, college, address, and other information it knows about you so that it can pull up comments, blog posts, photos, and other mentions of you across the Web even if your full name isn’t used. 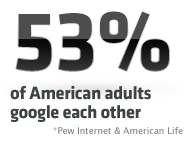 In computer science this is known as the persona isolation problem, or in national security circles the “27 Mohammeds problem.” How do you know that the John Smith mentioned in an online forum is your John Smith. But ReputationDefender has an edge. Fertik explains: “The unfair or competitive advantage is we are doing searches of our customers, who give us more information about themselves.” So it can narrow down, when someone is talking about you. And it constantly keeps an eye out for new mentions, so you don’t have to Google yourself every morning.

“We now have a whole generation of folks growing up who think it is ok to say whatever they want to whoever they want, whenever they want,” says Shlein, who is an online security veteran and sits on the board of Lifelock, another online security firm which addresses identity theft, with Cowan. ReputationDefender aims to help people regain control of their online reputation, which is increasingly becoming an issue whenever someone applies to a new school or for a new job, or even when they are trying to get a date. Because what is the first thing a college admissions officer, potential boss, or prospective date will do? Google your name. And anything said about you on the Web will come up.

The extent that ReputaionDefender can actually do anything about erroneous or unflattering information about you varies, but for the most part simply knowing what’s out there is first step to doing something about it. And the company is definitely seeing strong early demand. “The numbers are going up and to the right,” says Shlein. Fertik won’t go into too many financial details, but does share that when the company launched in October, 2006 it made $33,000 in revenues. The next year, revenues grew to $1.21 million. He pretty much bootsrapped the whole thing. “We were profitable for much of the history of the company,” he says. Even in the fourth quarter of 2008, when the economy was falling apart, ReputationDefender had a record quarter, followed by an even better one in the first quarter of 2009. It was that financial strength which helped convince Cowan and Shlein to back the company. Now, the company is investing ahead of growth and is not currently profitable.

It is still early days and there is a lot of work ahead. Perhaps ReputationDefender’s biggest weakness is that it does not have a full view into Facebook, where only public comments or photos show up. If somebody is going to badmouth you online, chances are it will be on Facebook. “I don’t think we are especially awesome in getting into the semi-closed systems yet. We don’t yet have the ability to search all of Facebook,” Fertik acknowledges. But he does have at least partial access to 40 social networks, and this is a big area of focus for him. And over time, as Facebook becomes more public by default, it will become more visible to ReputationDefender. It’s the public stuff that most people care about anyway.