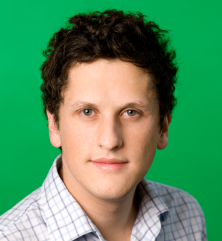 This guest post was written by Aaron Levie, CEO and co-founder of Box.net. Box.net was founded in 2005 with the goal of helping people and businesses easily access and share information from anywhere. Box.net is now used by millions of individuals, small businesses, and Fortune 500 enterprises worldwide.

Consumers have readily embraced the Cloud in the form of services like Facebook, YouTube and Gmail, but businesses are a different story. While small and medium businesses have been drawn to the cost efficiencies of web-based solutions, the Cloud has thus far hovered on the periphery of mainstream business IT, with many dismissing it as unfeasible on a large scale, or at best, a distant solution. But cloud-based services are about to tip for the enterprise, and quickly.

The coming shift echoes the disruptive transformation of IT in the ’90s, driven by companies like Oracle, Microsoft, Lotus and Sun. Geoffrey Moore, author of “Crossing the Chasm” and “Inside the Tornado,” studied this transition and described the chain of adoption for enterprise technology: innovators are followed by early adopters, visionaries, and finally IT departments. And when enterprise technology hits this latter group, we’re officially in the Tornado.

Well the dust is beginning to swirl once more. Over the next two years, enterprise IT will follow in the footsteps of today’s early adopters and visionaries, finally embracing the Cloud and moving content, applications, and processes to the web. So what are the catalysts for this perfect storm? A combination of maturing platforms, generational and cultural shifts, and compelling economics, making cloud-based solutions the undeniable choice for nearly all future non-core technology purchases.

The platforms are ready

Today’s web-based platforms are finally maturing into real, viable solutions for businesses. They’re not just for small businesses or early adopters. Between Amazon EC2 for infrastructure-as-a-service, Force.com for platform-as-a-service, and Google Apps for software-as-a-service, companies large and small now have enough options to run their entire business in the Cloud. These complementary services can now talk to each other like never before, making it easy for IT administrators to weave connections between web platforms. And unplanned downtime is no longer a valid argument against the Cloud: like most cloud-based offerings, Google guarantees that Google Apps will be available at least 99.9% of the time, and will reimburse customers if this target isn’t met. According to a study by The Radicati Group, companies with onsite email solutions averaged 30-60 minutes of unscheduled downtime and 36-90 minutes of planned downtime per month in 2008. Even after a spat of outages in 2008, Matthew Glotzbach of Google’s Enterprise unit estimated that Google Apps downtime totaled a mere 10-15 minutes per month. Furthermore, cloud vendors front the bill to get the server back online, not your internal IT team.

Make way for new workers and a new way to work

Not only have our applications and platforms changed, so have the people using them. We’re now seeing the newest generation of the “knowledge worker” emerge in the enterprise. The formative years of this generation were spent chatting online, facebooking strangers and friends alike, and maxing out their hard drives with music and movie downloads. Accordingly, these employees are simply not capable of doing more work to find information than performing a Google search (I know, because I am one). They have no patience for convoluted IT policies, limited email storage and siloed data. Cloud-based IT services are the only solutions that can match the experience, efficiency, and access that we get in our personal lives. We’re already seeing companies like Salesforce mimic consumer tools with offerings like Salesforce Chatter. It’s only a matter of time before more vendors catch on that enterprise collaboration should be as easy as social networking, and must likewise take place in the Cloud.

The cloud is cheap

Okay, so we’re almost out of the recession. Companies who hunkered down will soon shift from survival mode to winning back marketshare. But guess whose stock is already at an all-time high? Salesforce. Despite the still-fragile economy, businesses are buying into the cloud, and there’s a lot more room to grow. At the risk of sounding completely obvious, they’re buying these services because they cost so much less to maintain and the barriers to getting started are much lower. And although the economy is showing signs of improvement, the past few years have fundamentally changed the way we think about technology purchases. Higher cost does not necessarily translate to higher quality. Products from behemoth software vendors like Microsoft are not necessarily more reliable. And in the Cloud, substantially fewer people are needed to get started: a medium-sized business five years ago required dedicated personnel, consulting, and redundant infrastructure to deliver corporate email. Today, the point of entry is a credit card transaction, with no infrastructure in sight. The time to transition to cheaper, more manageable platforms is now.

Momentum in the IT department

Managing infrastructure and technology that is not competitively-additive has become competitively-expensive. As we approach the Tornado, IT experts are redefining their roles and priorities from directly maintaining all the “contextual” applications around their business (CRM, email, file servers, search) to honing in on technologies that are core to their company’s performance and competitive advantage. This opens up the IT department to a new world of meaning and purpose. IT will move from a pure systems and process management function to a business success through technology service.

How do we know this is happening? IT decision-makers are starting to knock on the doors of Google, Amazon, Salesforce and Box.net. Box’s 10 largest sales in 2009 were made with IT managers at organizations you’d recognize. The common thread linking these IT buyers? In our case, they want to move toward Cloud Content Management, in lieu of spending hundreds of thousands of dollars on traditional ECM. This comes from awareness that their role is not about being bogged down in server administration, storage limitations and downtime, but rather about finding best-of-breed technology to solve their company’s issues and enhance their business, quickly. Imagine a world where IT is defined as a means to increase margin through people and process productivity gains, rather than an expense to the organization.

Ok, so what’s holding us back?

There is no question that Security concerns and a fear of relinquishing control of data and applications are still holding back adoption of cloud technologies in the enterprise. The interconnectedness of our web identities, and especially our reliance on email as a primary authentication provider, limits the level of security possible for web-based software today. We saw an example of this with Twitter’s leaks from Google Docs. But traditional IT has never been fully secure either, and Cloud IT providers have a number of mechanisms at their disposal to improve lock-down procedures on all fronts – plus, their business survival hinges on reliability and security. Between two-factor authentication, centralized network and hardware security, and other standards now being implemented by cloud providers, I think we’ll see the Cloud as being more secure in aggregate than traditional IT.

Vendors of cloud-based services are aggressively tackling security concerns as a final hurdle, and thanks to maturing platforms, a new generation of knowledge workers and compelling pricing, the Tornado is already gathering momentum. Many concede that the Cloud is indeed coming to business, but see it as a distant solution, perhaps five or ten years off. But the Tornado-like transformation of Enterprise IT will soon be upon us. And once adopted, the Cloud is inherently scalable. Internal infrastructure can take months to set up, but cloud solutions can be online within hours. Traditional platforms require ongoing maintenance and tedious administration and training, but web-based platforms can (and should!) be as end-user friendly as their consumer-focused counterparts. And because cloud-based platforms can be woven together, it’s no longer about forcing your business to fit a one-sized-fits-all solution, but rather designing a solution to fit your business.

Most businesses have spent the past few years in survival mode, trying to minimize losses and weather the recession. The coming Tornado will be game-changing for those who dive in early, and devastating for companies that continue to resist. Once the Cloud tips for enterprise IT, the whirlwind of adoption will be impressive. We should see major surges of implementation in 2010, with the Tornado in full force in 2011. And unlike the storm Geoffrey Moore detailed in the 1990s, the drivers of this fast-approaching disruption won’t be the behemoths Oracle, Microsoft, Lotus and Sun. They’re too bogged down by rigid ecosystems and product upgrade commitments. Rather, it’s a new generation of cutting-edge, nimble software companies that are disrupting the current order and leading the charge into the storm. A storm that is bringing unprecedented change to IT and competitive advantage to early adopters, ultimately redefining the role of Enterprise IT itself.