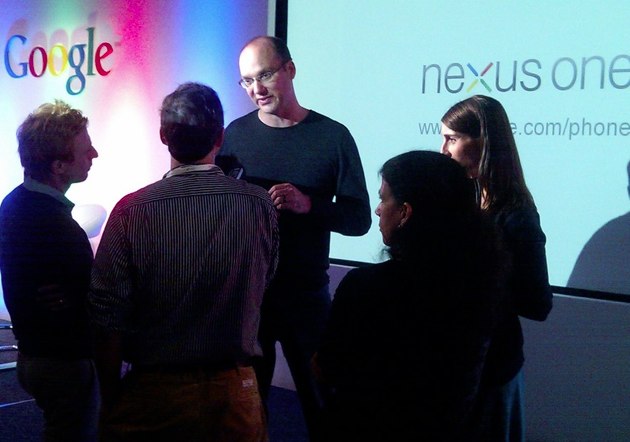 Andy Rubin, pictured above surrounded by press after the Nexus One event today, is the guy who founded Android and sold it to Google in 2005. And he’s starting to remind me a little of another product fanatic, Steve Jobs.

Everyone knows about Jobs’ amazing ability to build hit products and disrupt entire industries. I wrote extensively about this in What If Steve Jobs Hadn’t Returned To Apple In 1997?. Jobs is all about the product. Every last detail. And it shows. He’s disrupted the mobile phone, music, film and television industries, and we haven’t even mentioned the Macs yet.

But Jobs is also notoriously touchy and difficult to work with. He demands perfection and doesn’t really work well with others. And Jobs is distrustful of the press. Apple’s PR group is mostly there to not return calls.

We forgive him all that, of course. Because he’s changing the world, and forces competitors to do better just to try to keep up. The world, particularly the tech world, is a far more colorful place because of Jobs. There is no one at Apple who has the product vision to push that company forward once he steps down. He’s the Alexander the Great of today’s tech world. And he’s also able to captivate a crowd when he’s on stage.

Rubin isn’t Steve Jobs. He doesn’t have the product track record that Jobs has (no one in the world does). And Rubin is shy on stage – he doesn’t make any real effort to win over the crowd. There was no “and one last thing” line at today’s Nexus One launch by Rubin. Only Steve Jobs can really pull that off.

But Rubin is a product fanatic in the same way that Jobs is. The NY Times did a good overview of Rubin in 2005. One line about Rubin, a former Apple engineer and cofounder of WebTV and Danger, stuck with me from that article: “Mr. Rubin is a proven member of an earlier group of engineers-turned-entrepreneurs who have a passion for building complete digital systems.”

I’ll say. A lot of credit for the Nexus One goes to his senior team, particularly Mario Queiroz and Erick Tseng (two people Google put on stage today). But the vision for the Nexus One was all Rubin, we keep hearing from people at Google. And he wouldn’t compromise, even after it was clear Google would miss their original deadline of shipping the Nexus One in time for the 2009 holiday rush. “Rubin kept saying it has to be thinner,” mumbled one tired team member to me after the event, “so we made it thinner.”

He has incredible power within the Android group at Google, and even VPs at Google there make sure not to cross him. People who work with him have told me of his amazing attention to detail and his unbending demands that a product be perfect before it goes out the door. A lot of that shows in the Nexus One, Google’s first complete end to end hardware and software system.

Rubin has many of the same personality traits as Jobs. He’s a product visionary and fanatic who likes the dictatorial style of product development. He’s not great with people, and doesn’t deal well with the press. At today’s Nexus One event you could see his barely contained frustration at the questions fired off at him during the Q&A session. “I’m just not going to say anything else about that” was one quip he fired off after a reporter kept asking the same question over and over. Jobs, of course, doesn’t do Q&As.

And that’s just fine with me. I don’t care if the people we cover are likable, or like me. Being affable or loquacious isn’t a job requirement for Awesome Product Guy. You just have to have a strong vision, be unwilling to bend, and have the means of following through with that product to launch.

Like Jobs, Rubin has known failure. He’s even been fired from his own company, Danger. But like Jobs, he went on to bigger and better things. For Jobs it was NeXT and Pixar, then back at Apple. For Rubin, it was Android.

Is the Nexus One as disruptive as the iPhone? No. Apple started this party and the Nexus One is part of that same revolution. But it’s disruptive in different ways, and its openness (and pairing with Google Voice) is pretty exciting. And I get the feeling that his team is just getting started with this whole Android thing.

Ten years from now we’ll look back. Rubin may just be another exec at another big company. Or he may be something more. Heck, he may even be running Apple. His personality would fit right in.