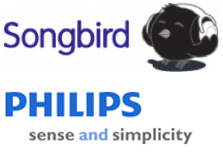 Don’t count Songbird out yet. The open source media player that’s increasingly positioning itself as an alternative to Apple’s iTunes has forged a deal with global electronics maker Philips. Under the agreement, which will be announced later today at CES, Songbird’s software will come bundled with the Philips line of GoGear portable music players, available worldwide. We first reported a partnership between Philips and Songbird back in September, but details were vague at that point.

Songbird will be releasing a Philips-branded version of its software with a few key differences, most important of which will be the application’s native support for each GoGear device. While Songbird offers support for some portable music devices (they recently upgraded their support last week), the experience for users isn’t always as seamless as they typically get from the ubiquitous iPod/iTunes combo. The Philips-branded version of Songbird will be custom tailored for the GoGear devices, which means it will recognize exactly which device you plug in and which features that device supports (the same way iTunes knows if you plug in a Nano vs an iPhone). The application can be used for song purchases and playlist management, as well as firmware updates.

The Songbird software will come as a self-extracting install with some devices (you plug the device into your computer and it will install onto your Windows machine automatically). For other products it will ship on a disk, or users will be directed to download the software from a website. The Philips-branded software is only available on Windows for now, but Macintosh support is in the works. The Philips devices should still be usable using the standard Songbird application on the Mac, but you won’t be able to install firmware updates.

This is a big win for Songbird. The company had a very rough 2009, which included the departure of the company’s founding CEO Rob Lord and a struggle to raise new funding to remain afloat (though it eventually did complete a round at a significantly lowered valuation). Songbird’s core product, which offers song management alongside a deeper integration with web services than iTunes does, remains the same, but it’s now targeting a broader audience than it was before.

The partnership with Philips is Songbird’s first major step in this area. And we’ll likely see more deals like this as Songbird tries to to appeal to electronics manufacturers as a content manager that isn’t owned by Apple.

Songbird isn’t alone in this space though — another impressive product looking to offer an alternative to iTunes is doubleTwist.