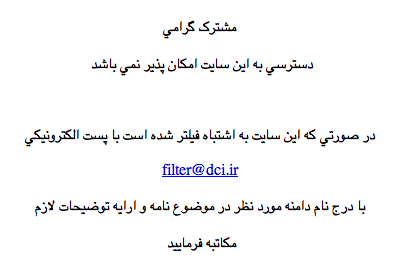 Badoo, a social network popular in emerging markets like Russia and Brazil, has been banned in Iran. As of December 2009 Badoo says it had broken the 50 million user mark globally, with 250,000 of those coming from Iran. Pictured is the text that comes up when trying to access Badoo from inside Iran.

Badoo runs a fine line between a social network and a dating or (more accurately) a flirting site, but it is not at all political. It may be this flirtatious aspect of the site which has inflamed the ire of the strict Islamic authorities – however, there has been no official reason given.

In January 2008 Badoo pulled in $30m from Russian investor Finam for a 10% stake. The money was to build the service in Russia and other emerging markets.