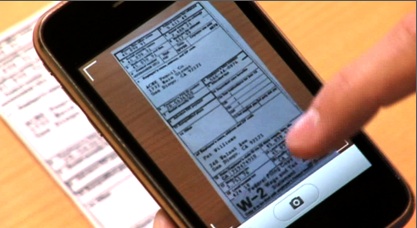 Nobody likes doing their taxes, which is why an upcoming iPhone app from Intuit called SnapTax is so genius. As you can see from the exclusive sneak peek demo video below, the app lets you snap a picture of your W2 form with your iPhone and automatically fills in your tax return. The app uses optical character recognition (OCR) technology to translate the images into words and numbers, which it then uploads into a light version of Intuit’s TurboTax software. The tax filers then correct any mistakes, enter additional data not on the W2 (such as interest income), answers a few more questions, and they are done. They can even file electronically from their iPhone.

The app should be available in the iTunes store in mid-January, and will cost $9.99. It is only for people who file simple tax forms, such as the 1040EZ, which is about 70 percent of Americans who file taxes. “I think we are more limited by the iPhone numbers than the EZ return numbers,” says TurboTax product manager Barry Saik. Although, this year the app will only work for California residents, who will serve as Intuit’s beta testers. Next year, versions will be available for many more states (TurboTax files both federal and state tax returns for users, and uses the same information to fill them out).

The OCR technology works better on newer 3GS iPhones than on 3G iPhones because they have more sensitive camera lenses. The app is about 80 percent accurate on 3GS iPhones versus 60 percent accurate on 3G iPhones, according to Intuit. The app takes you through all the data it captures and lets you correct any inaccuracies. And as you go along, you see your refund (or tax owed) tally up with each step. If only they could do this for people with more complicated taxes (people with mortgages, kids, and businesses). What if you could take a photo of every receipt and taxable event throughout the year, and then add your W2 and other tax statements at the end of the year, and be done? Hopefully, this is a first step in that direction.