Back in November, I wrote up a review of the new Magic Mouse, noting that it was “Apple’s best mouse ever, but…” Essentially, the problem is a software one. Apple gave its new mouse multi-touch capabilities, but only takes advantage of a fraction of what it can do. (And yes, it’s fully multi-touch capable.) A new third-party program called MagicPrefs, enables all the multi-touch capabilities you could ever want for the device — and even some you likely don’t.

MagicPrefs, which is made by developer Vlad Alexa, is a free piece of software that runs in the background once you start it up. It gives you a boatload of new multi-touch options for your Magic Mouse, broken into three main categories: Clicks & Taps, Swipes, and Drag, Pinch, etc. Clicks & Taps are the ones that are likely to be most useful to you, as they’re the ones that are the easiest to use, and get use to. MagicPrefs has options that allow you to set actions for two-finger clicks, three-finger clicks, four-finger clicks, and one-finger middle axis clicks. There are also all of those options and then some for “taps” which is essentially touching the top of the Magic Mouse without clicking on it. Clicking on the checkbox to enable any of these also shows you a picture of exactly how the function works on the Magic Mouse.

Similar options also exist for swipes (wiping you fingers across the top of the Magic Mouse, and pinching (pushing two fingers together on the top of the device or pushing them apart). Interestingly, there are also options for the Apple logo near the bottom of the Magic Mouse. Two options allow you to drag your finger from the logo left or right to enable some action. Another allows you to tap logo to enable something. 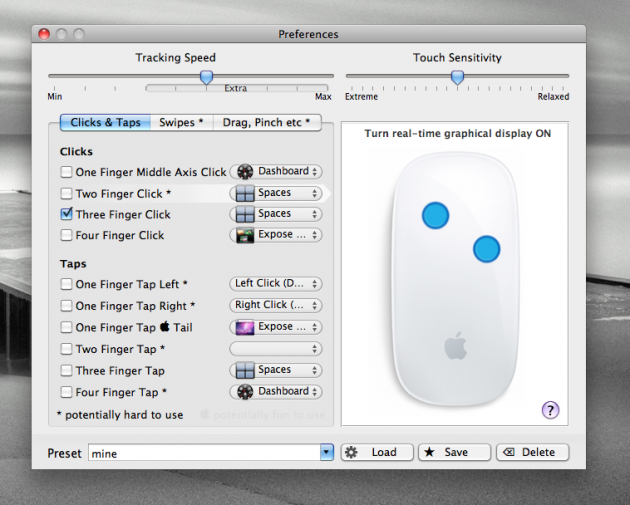 It’s important to note that a number of actions in both the Swipes and Drag,Pinch, etc areas are labeled with a “*,” meaning they are “potentially hard to use.” There are also some of the Clicks & Taps functions that have this warning. In my experience with the program, it’s a pretty good idea to follow these recommendations and stay away from the harder to use ones. Even an obvious action like two-finger click is hard to use because most people will have two fingers resting on the mouse at all times, and when they do a left or right click, the multi-touch top senses the other finger’s presence and will think you’re doing a two-finger click.

Still, after playing around with all the actions and finding the ones that I like and am comfortable using, MagicPrefs is extremely powerful. I now have easy access to things such as Expose, Dashboard, and Spaces right from the Mighty Mouse. It’s so natural, and makes so much sense, that I’m even more dumbfounded as to why Apple wouldn’t just build some of these gestures into the device’s software (and I suspect they will in the future via updates).

And there’s actually more. A number of users have complained that the tracking speed on the Magic Mouse is too slow, even at the fastest setting. This is especially a problem for users with the new 27″ iMacs (which come with the Magic Mouse) and/or two monitors (that’s a lot of screen real estate to cover). With MagicPrefs, you also get the ability to improve the Mighty Mouse tracking speed by up to 200%. It’s brilliant. There is also a setting to increase or decrease the touch sensitivity of the device.

MagicPrefs is perfect example of software making hardware better. And the developer promises that it will always be available for free (though he does accept PayPal donations on his site). He also promises that it uses less than 1% of system resources running in the background all the time. My usage of the software confirms this.

Recent reports indicate that the Mighty Mouse is selling better than any mouse in Apple’s history. This is hardly surprising given that the other ones were awful, and this one is good. But MagicPrefs makes it much better. If you have a Magic Mouse, you need this. 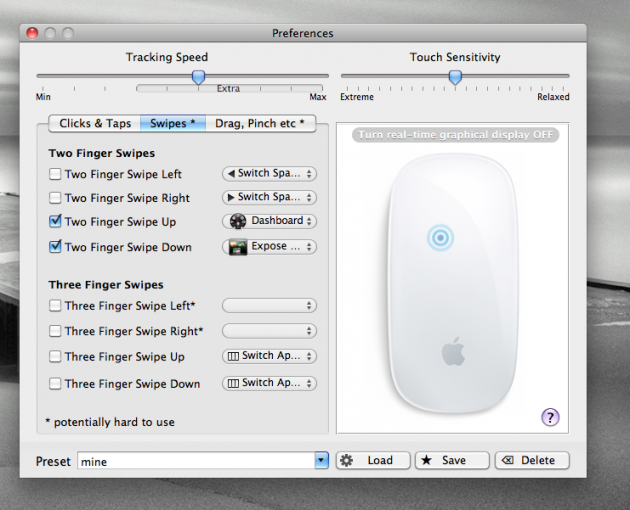 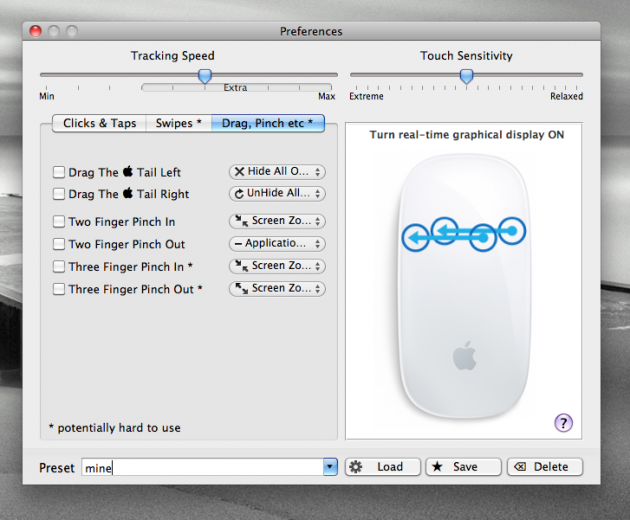