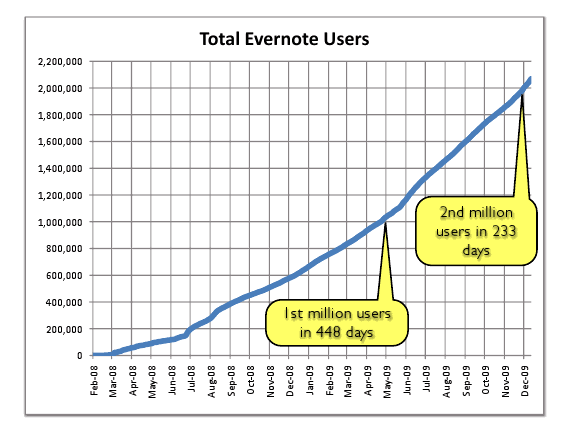 The idea of a life recorder that captures every moments of your life on video is still a bit of a tech fantasy, but an early version of the life recorder already exists. It is called Evernote, the popular iPhone (and now Android) app which lets you record your memories by snapping geo-tagged photos, making voice notes, or just text notes and making it easy to search through them. Evernote does not yet support video recording other than as an attachment (for premium subscribers), but when that becomes more practical it will.

“Evernote is definitely positioned to be the lifelogging tool of choice,” says CEO Phil Libin. “That ambient video capture was my original plan for Evernote—always recording, not storing, you bookmark it—that is exactly what we want to do.” Next year Evernote will introduce voice search, which will be a big step towards that ultimate vision (if you can search audio, you can search through what was said in videos). But full life recording is still a few years out. For now, Libin is more focussed on polishing his current product as it enters the mainstream.

Evernote just reached 2 million unique users, only 7 months after reaching its first million. It took Evernote half the time (233 days) to get to the second million milestone than it did the first million (433 days). These numbers are total unique logins over the life of the service.

The more interesting numbers are the number of active users over the past 30 days, which has also doubled to 700,000 from 360,000 since last May. Those users have created a total of 76 million notes, up from 36 million in May. But most importantly, the number of premium paid subscribers has gone from about 14,000 in May to 35,000. Premium members get more storage and features for $45 a year. The conversion rate for premium subscribers is also going up. Evernote is converting 4.9 percent of monthly active users to premium accounts, up from a 3.75 percent conversion rate seven months ago.

Unlike most apps, which see sharp drop-offs after only a few months, the longer someone stays on Evernote, the more likely they are to but a premium subscription. In the first month after signing up, about 50 to 60 percent of people drop off and only 0.5 percent sign up for a premium membership. But after the first month, retention stabilizes, and by the time people are using Evernote for 12 months, the conversion rate becomes 2 percent, and 6 percent for those on the service for 18 months (and that’s counting all those drop-offs in the first few weeks, the conversion rate for active users 18 months out is 20 percent). This pattern in conversion rates makes sense, since users are basically storing their memories in Evernote and the more they do that the more valuable it becomes to them. ” You can use it for free,” says Libin, “but we want people to use it forever, so that your memories in Evernote become the most valuable thing you have, period.”

Libin says the company is profitable on a gross margin basis. He is able to cover all of his variable costs from revenues, and is on track to become fully profitable over the next 18 months. In November, Libin raised another $10 million, bringing the total raised to $26 million. “We definitely sold the vision, but nobody would have bought without the metrics,” says Libin of how he raised the money. Trying to become the de facto life recorder is a long ten-year vision. Evernote’s steady traction in attracting premium subscribers is what will allow it to get there.

Evernote’s new users per day keeps growing every time it launches on a new platform or an upgrade (as it did over Christmas for its iPhone app, which now offers local storage). Those 2 million cumulative users are spread across iPhones (49 percent), Windows desktops (30 percent), Web browsers (29 percent), Mac clients (17 percent), Palm Pres (4.4 percent), Windows Mobile (3.9 percent), Blackberries (3.8 percent), and Android (1.4 percent). These device percentages add up to more than 100 because some people use Evernote on more than one device.

Looking at new users per day is more instructive. For instance, the Android app which just launched two weeks ago is signing up about 2,000 new users per day, about the same as the iPhone app. iPhone users represent 34 percent of daily active users, but Android already represents 3.4 percent—more than Windows Mobile, Blackberry or Palm Pre (which are all range from 1.2 percent to 1.8 percent). Libin thinks Android will contribute significant growth in 2010. At its current rate of signing up about 6,000 new users a day, Evernote should hit its next million-user milestone in 166 days. 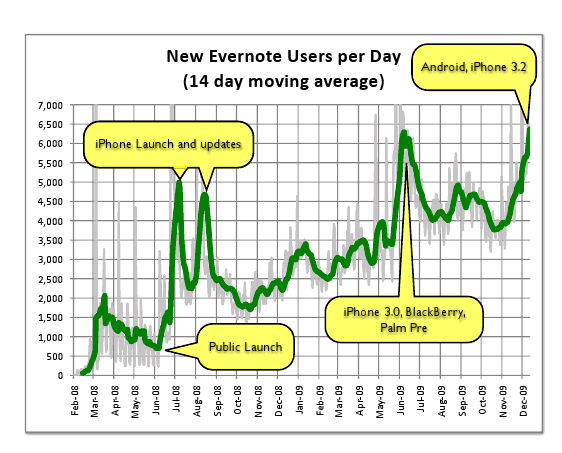 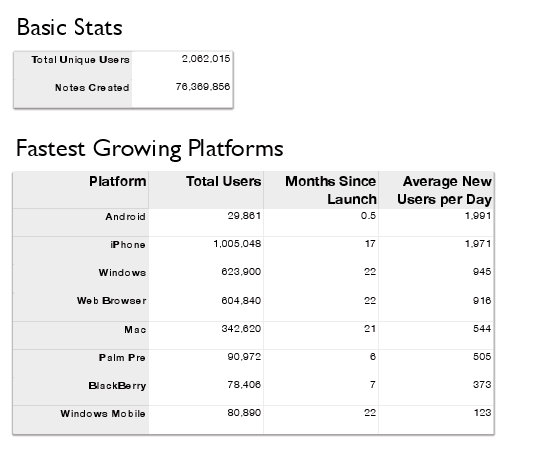