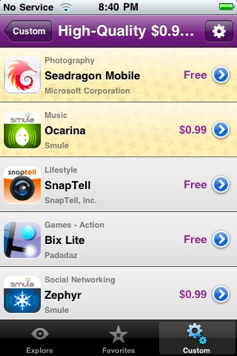 A few months ago, Apple finally released a Genius feature for the App Store — something it had needed badly ever since the number of applications available spiraled into the tens of thousands (it’s now at around 120,000). The new Genius feature recommends applications that Apple thinks you’ll like based on your past choices, but it isn’t perfect. And Appsaurus, a new iPhone app launching today in the App Store for 99 cents, thinks that it can outsmart Apple’s built-in Genius.

Co-founder Luke Iannini says that Apple’s Genius for Apps doesn’t really have many advanced algorithms working in the background to determine what users will like. Instead, he says it’s based on a straightforward metric: when you choose an application to use as a seed, it takes the top ten applications other users who have that app installed are most likely to have. That works pretty well, but it doesn’t necessarily make smart recommendations based on a longer term analysis of the apps you like.

Appsaurus does. After launching the application, you’ll be presented with a handful of semi-popular apps from the App Store and asked to pick the one you like best. Once you pick your favorite, it shows you another round of apps. After four rounds or so, the app begins to learn your preferences, and you keep ranking more apps to help fine-tune its recommendations. In essence, it’s trying to build a profile based on your entire library of apps, not just one. If you’re presented with an application that you’ve never heard of (which happens frequently), you can hit an arrow to read its summary and see screenshots. Unfortunately Apple won’t let applications access the App Store’s reviews and star ratings, so you’ll have to do without those.

But Appsaurus has one severe disadvantage: it can’t actually look at the apps you have installed,  at least not yet. That means you’ll have to manually tell Appsaurus your favorite apps, which only takes a few minutes but certainly doesn’t make things easier. You don’t have to rely exclusively on the app’s algorithm though — you can run custom searches if you already know what kind of application you’re looking for. You can fine-tune these searches by category, maximum price, and keyword. And the app itself is quite well done, with polished design and animations.

This is actually the Appsaurus team’s second attempt at making an iPhone app recommendation engine. Last year, they launched Appalanche, which shared some similarities with Appsaurus in that it was meant to help surface interesting apps, but was a web app rather than a native download. The precursor to Appalanche is an ad voting engine called Adpinion. The company was funded by Y Combinator back in 2007. 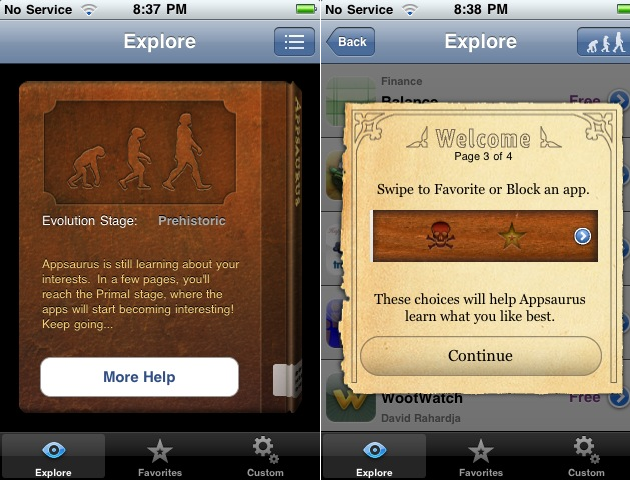