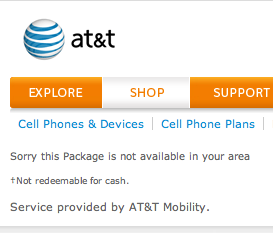 If you live in the New York City metropolitan area, as I do, and try to buy an iPhone from AT&T’s website, you will probably get the same message I did after I entered my zipcode: “Sorry this package is not available in your area.” Apparently, this is a big story. (Hey, it’s the tail end of a long holiday weekend, and there is nothing else going on). For instance, the Consumerist called some hapless AT&T customer service rep who confirmed that “the phone is not offered to you because New York is not ready for the iPhone.”

Given AT&T’s history of bandwidth problems, especially with the iPhone, the idea that AT&T’s network can’t handle the iPhone is not entirely outlandish. Remember Operation Chokehold, and the resulting tiff between Fake Steve Jobs and AT&T? It was a failed attempt to bring AT&T’s network to its knees by everyone using their iPhones at once as a way to protest how much AT&T’s data network sucks. When AT&T called him irresponsible, Fake Steve responded:

I mean, consider this fact:

AT&T, a huge wireless provider in the United States, cannot reliably connect calls in New York City.
How can this be? —Fake Steve Jobs

And now, here it is, on a silver platter: AT&T is no longer selling iPhones to people in New York City! Well, at least not online. Is this AT&T’s sneaky way of limiting bandwidth consumption in its largest market? If only, then we’d have a story.

After I went to AT&T’s website and generated the message above, I logged in, since I am a customer. When I tried to upgrade my phone to a newer iPhone, I encountered no problems. Then I called customer service, and was told they could ship me a new iPhone, no problem. I called once more, but this time didn’t say that I am an existing customer. The only phone available was an 8GB refurbished iPhone. AT&T’s online store was out of stock of everything else. Then I tried one last time and gave a different Brooklyn zipcode. The sales rep again told me the online store was “currently out of stock” and that “you have to go into the store.” It appears that AT&T’s phone and online orders come from a different warehouse (duh) than the ones which service its stores.

So if you really want to buy an iPhone in New York City, go to an AT&T store, or an Apple Store. Or try Apple’s website. That seems to be taking orders for New York City residents just fine ( I got up to the checkout).

And, yes, I’ve contacted several PR people at AT&T. But like I said, it’s the holidays.

Update: AT&T PR responds with this cryptic one-liner: “We periodically modify our promotions and distribution channels.” Thanks, way to clear things up. There are also reports that fraudulent activity may be the cause of the problem.