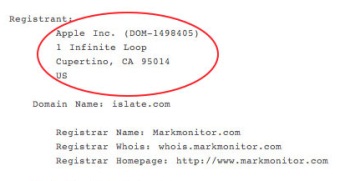 Nice scoop by MacRumors, which reportedly retrieved historical evidence that Apple has acquired the domain name islate.com back in 2007. Apparently, the Cupertino company registered the domain through brand protection firm Mark Monitor to conceal the fact that the domain name is theirs, as usual, but was briefly listed as the owner at some point in the past nonetheless.

If correct, that means we can add a rumor to a rumor: that the unconfirmed, unannounced but most definitely coming (maybe) Apple tablet device will be named iSlate. That would be in line with earlier connections of the ‘slate’ term to the elusive tablet computer, based on New York Times Executive Editor Bill Keller calling it something to that effect in a speech.

There’s a lot of islate-related domain names with different TLDs that Apple most definitely does not own (islate.org, islate.net, islate.be, islate.nl, islate.es, and so on) but I did find a couple of interesting things trolling whois servers.

A search for islate.co.uk lists Mark Monitor as the owner, just like islate.com. This could be meaningless, but we know for sure Apple works with Mark Monitor for other domain names and the United Kingdom is a key market for the company. Registration date: 17 November 2006.

Unfortunately, the whois server for German TLDs (whois.denic.de) is currently down, so I can’t look up who secured islate.de at this point. Update: owned by Innovative Dynamics GmbH since December 2007.

But look up who the owner of islate.fr (country TLD for France, a third key country for Apple in Europe) is: a Paris-based IP property attorney firm called Wilson & Berthelot. Guess who the technical contact for the domain name registration is? Mark Monitor. And doesn’t Apple work with law firm Wilson Sonsini Goodrich & Rosati in the States?

Other related domain names that were secured through Mark Monitor: islate.info and islate.biz, both of which were registered on the same date as islate.co.uk: 17 November 2006.

On November 21, 2006 a company called Slate Computing (registered in Delaware) filed for a US word mark for ‘ISLATE’. Notably, that was right around the time at least three islate-related domain names were registered.

You won’t find any information about any company called Slate Computing online, although according to the filing these are the goods and services they offer:

That’s quite a list for a company that doesn’t even have its own website, but it matches exactly what Apple’s business is all about. Is Slate Computing just a shell company created by Apple, or is someone trying to play a number on them? More on that later.

Either way, the USPTO record shows that an opposition was filed on June 10, 2008.

In case you’re interested, the domain name slatecomputing.com is owned by a company called “Cayman Ninety Business” – with an office address on the Cayman Islands – which according to Domain Tools owns over 11,000 other domain names (all the marks of a savvy domainer and/or cybersquatter at play).

I did a search for ‘islate’ on OHIM, and found out that same Slate Computing has filed for a trademark for the term in the European Union as well. It was filed in 21 November 2006, on the same day the filing for the ISLATE word mark was registered in the US.

Listed as legal representative on the form: UK-based Edwards Angell Palmer & Dodge, the same law firm Apple worked with for securing the EU-wide trademark for the term ‘Macbook’, for one.

Here’s what I think happened, based on the evidence presented above: Apple decided on the name iSlate for a new product it was working on, whether it will ultimately turn out to be for their new tablet computer or not, in November 2006. That same month, they moved to file for a trademark for the name in the United States and Europe under disguise, setting up and using Slate Computing LLC as a shell company, and securing a couple of available domain names through Mark Monitor (islate.co.uk, islate.biz and islate.info).

Then, they acquired the domain name islate.com from whoever owned it at that point. MacRumors reports that the domain name was under ownership of a company called Data Docket, Inc back in 2006, and a search for that company turns up this interesting article on that company. I’m told Data Docket is in fact affiliated to Mark Monitor, which would make sense.

Either way, Apple reportedly got a hold of the domain name early 2007, right about the time they also secured islate.fr.

The evidence is overwhelming: if there’s going to be a new tablet from Apple coming out next month, chances are that it’ll be christened iSlate.

Feel free to start lauding or ranting on the chosen name.

(Original image: MacRumors, who worked with Mark Gurman for the story)