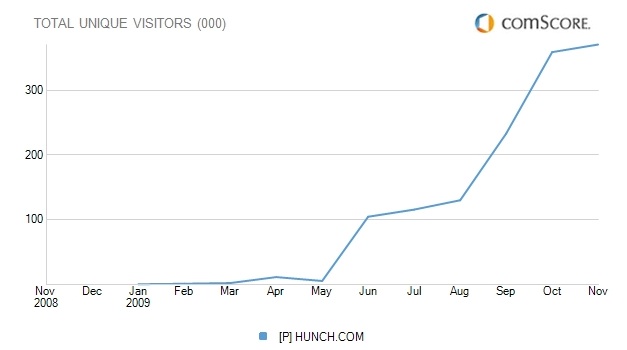 Sometimes it takes a while for a site to find its legs. Hunch, which launched last March to much fanfare, is only now in the past few months capturing the attention of consumers. As the comScore chart above shows, Hunch recently hit a growth spurt, jumping from an estimated 130,000 unique U.S. visitors in August, 2009 to 371,000 in November, 2009. While the overall size of the audience is still small, nearly tripling it in three months certainly makes for an eye-catching chart.

Hunch takes a little getting used to. It is not a straightforward Q&A site. Co-founder Caterina Fake compares Hunch to a “Wikipedia for decisions.” Contributors create a series of questions aimed to help visitors make decisions. The more questions you answer about any given topic, the better guidance Hunch is supposed to be able to give you.

Like any crowdsourced service, it is designed to get better the more people use it. So far, people have answered more than 28 million questions to train the Hunch system about themselves. Although it is not necessary to do so to get suggested answers. But the more you put in, the more tailored the answers are to your specific needs. It took time to build a corpus of useful answers and decision trees which help people figure out everything from “What’s my favorite color?” to “What should I eat for lunch?” or “What places should I visit before I die?”

Early on, Hunch asked too much of its users before providing an answer, but now it seems to have enough topics and data to take users straight to its top recommendations. Shortening the cycle between landing on the site with a question and finding an answer may account for part of the jump in Hunch’s popularity. But Hunch is up against a lot of competition, including from social Q&A service Aardvark, which only recently expanded to the Web from an IM platform. My hunch is we’ll see both grow fast next year.