The short gloves are off. Earlier today, both Google and Facebook got into the URL shortening game with goo.gl and fb.me. Google’s move in particular is a direct challenge to bit.ly, the rising independent standard among link shortening services. Bit.ly’s response is in effect to ask publishers and consumers who they trust with all their data: Google or the rest of the Web?

To that effect, it is rolling out a new service called bit.ly Pro, which allows Web publishers to bit.ly to send out short links with their own branded (short) domain names such as nyti.ms, 4sq.com, mee.bo, or tcrn.ch. Publishers in the beta include AOL, Bing, foursquare, Hot Potato, the Huffington Post, Meebo, MSN, the New York Times, the Onion, TechCrunch, and the Wall Street Journal. What bit.ly is offering these publishers (us included) is a way to use a branded, trusted short URL which is powered by bit.ly. Publishers also get an analytics dashboard which shows realtime stats like the total number of clicks, and their distribution by geography and referring sites. Pro accounts is where all the money is, although bit.ly is not yet charging.

We’ve used our branded short domain tcrn.ch before with awe.sm for our story links we push out to Twitter, but switched to bit.ly because it was fast becoming the standard. In November, the bit.ly service shortened 2.1 billion links, up from 11.8 million the year before, and it currently accounts for about three quarters of all short links on Twitter.

As realtime streams increasingly become the communications bus of the Internet, the need for short links and their popularity will increase. The data surrounding those links—who passed them, which are the most popular, which are rising, which are falling—is potentially very valuable. To the extent that publishers and consumers don’t mind all of their data flowing through Google, they might just go with goo.gl and not worry about it. Bit.ly is betting they would rather control their own short links.

The appeal for publishers to use their own branded short URLs is that it acts like a verified link. Consumers who are familiar with the brand can learn to trust those links. In contrast, anything can be behind the generic short URLs, although bit.ly is taking steps to fight spam and malware abuse. Facebook with fb.me appears to be doing no more than just creating its own trusted short link for Facebook pages. Google, on the other hand, could easily expand goo.gl into a generic URL shortening service. Goo.gl launched only for Feedburner and Google Toolbar, but it is being used to shorten links from any and all domains.

Google was rumored to be sniffing around bit.ly earlier this year, but no acquisition ever materialized. Maybe it was just doing its homework. 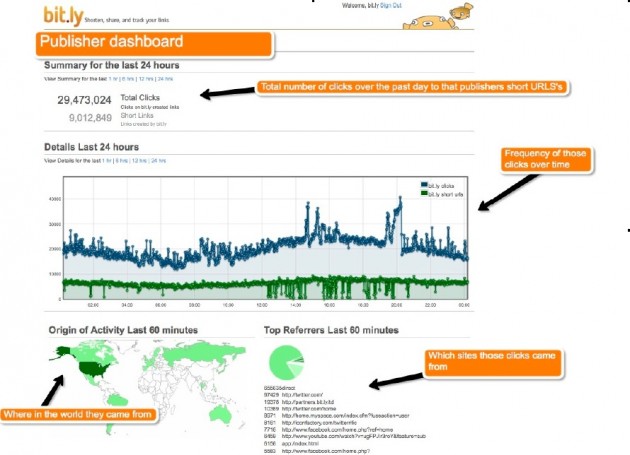