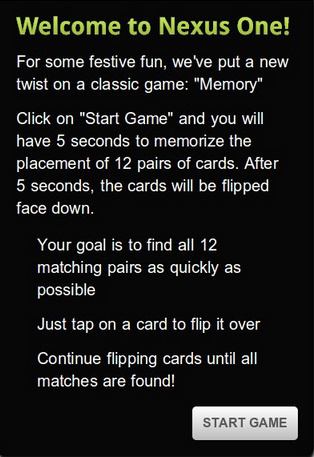 Those Googlers are apparently having quite a bit of fun with their new Google Phones (aka Nexus One). From the looks of it, they’ve set up some sort of holiday game that’s a twist on the game memory. But the catch is that you can only access this game from the Nexus One, any other device will be forwarded to the standard Android homepage.

If you visit this URL, you should see a quick flash of the game’s rules before you’re redirected. But if you’re on the Nexus One, the rules page would remain. It reads:

Welcome to Nexus One!

For some festive fun, we’ve put a new twist on a classic game: “Memory”

Click on “Start Game” and you will have 5 seconds to memorize the placement of 12 pairs of cards. After 5 seconds, the cards will be flipped face down.

Just tap on a card to flip it over

Continue flipping cards until all matches are found

Digging into the code of this page reveals that it is in fact sniffing to see if your device is the Nexus One. If not, it does the redirect.

Nice of Google to spread the holiday cheer with a game that only they can play. They even made their own festive Android icons for it (right). Bah humbug.

Update 1: Apparently, one of those cute Android guys is named “Robo-Ralphie” after the kid in A Christmas Story. Awesome. Thanks to Andy, one of our developers, for digging this up.

Update 2: Of course, if you really want to trick the sniffer into thinking you’re on a Nexus One when you’re not, you can do that too. Andy and Emmanuel both point out that you can easily spoof the user agent and play the game to your heart’s content. For example, in Safari 4 if you have developer tools enabled, go to Develop -> User Agent -> Other and type ‘Nexus One’ in the box.

You can do it in Firefox by typing ‘about:config’ in the address bar and filtering on ‘useragent’ and setting it there. It’s apparently not quite as easy to do with the Chrome dev tools.

The other way is to just download the source of the page and the JavaScript file that it links to and modify the JavaScript to not check your User Agent at all — that’s the more permanent solution.