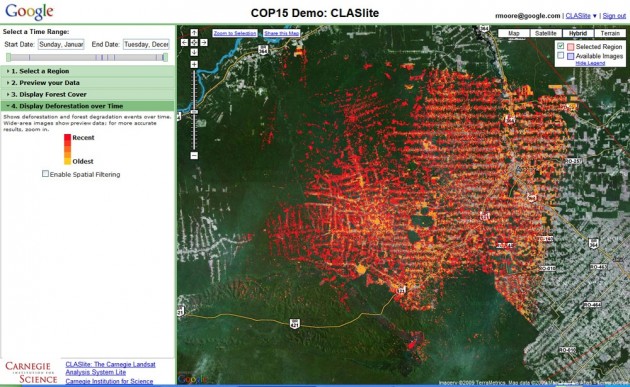 One of the most effective ways to battle global warming would be to curb deforestation around the world. Google is helping today on the monitoring front by combining satellite imagery from Google Earth with heavy computational analysis in the cloud. Studying satellite imagery can identify where deforestation is occurring, but serious analysis requires a lot of computational power to compare images over time and locate illegal deforestation activity before it is too late to do anything about it.

The image above, for instance, shows deforestation in Rondonia, Brazil over the last two decades, with recent activity in red. The red spots in the image below show deforestation hot spots in the past 30 days. Google is working in collaboration with scientists who have created software to analyze deforestation activity as seen through satellite imagery. But the desktop computers these scientists typically use can take days to run each analysis. By moving that to more powerful computers in the cloud, Google can reduce that time to seconds while also making available literally petabytes of raw satellite imagery data.

While this prototype service is not publicly available yet, Google plans to give scientists access to it on a not-for-profit basis. Google will generate goodwill from the effort, but more importantly it’s a great marketing example that shows off the power of cloud computing. It’s a proof point for a future Google wants to see come to pass. 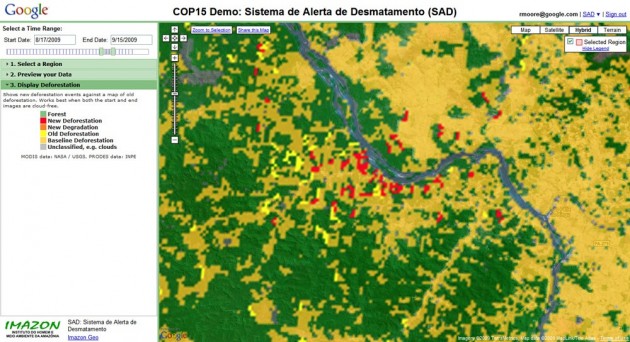