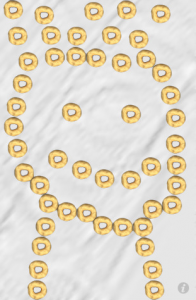 If you’re anything like me, you get incredibly annoyed each time one of Apple’s “There’s an app for that!” ads rolls. They like to pretend that there’s an app for everything – but you.. you know the truth. Sure, they have tip calculators, tens of thousands of games, and an app that makes you sound like T-Pain – but do they have cereal bowl simulators? Until this week, the answer was no.

Alright, now that I’ve written a satisfactory introduction, I’ve just gotta admit it: the only reason I’m writing about this is because it’s friggin’ hilarious. The app itself is cool and all [iTunes Link], but the accompanying press release sealed the deal.

“We sold 26 copies,” said Nick Marroni, Owner, Designer & Producer, MEE. “We weren’t necessarily expecting instant great success, but damn,” he continued, before going on to explain that at least half of that meager 26 sales must have been family and friends (whom also account for iLikeCereal!!’s current five star rating, of course).

iLikeCereal!!, a milk and cereal physics sim, unashamedly born out of fellow iPhone app Koi Pond’s success, but yet still lovingly crafted and uniqueified and innovateded by its creators (it’s got sweet music, too), just didn’t quite take the App Store charts by storm.

With full French, German, Italian, Spanish, and Japanese (don’t forget Croatian) localizations, Marroni and Galic found it especially awesome that not a single Spaniard or Nihonjin deigned to partake in the breakfast cereal shenanigans.

“We know that cereal’s not the biggest thing outside North America, but it’s almost like people haven’t even heard of breakfast in some parts of the world,” said Marroni, in between bites of some delicious and sugary sweet Choco Bombs.

Beginning life as a work-for-hire project in the heydays of early 2009, and eventually being amicably dumped by the original publisher and turning into a work-for-nothing project just a few short days ago, iLikeCereal!! has a long and storied history.

“Anyway we spent four months, on-and-off, on what was supposed to be a four week project and packed it with a lot of cool features and polish–except for the UI; that really ain’t pretty, but hey, that stuff costs money, man, and artists don’t work for free,” said Galic.

Nine months after initially beginning work on iLikeCereal!!, the time was finally come to unleash it on the App Store and the dynamic duo at last got down to business and submitted the app to Apple for approval.

“It was approved quick enough,” said Galic. “Though, it wasn’t until a day after we’d got approval to go on sale and realized that, since we didn’t launch at the exact nanosecond that we received approval from Apple, we’d be buried a day down the new releases list (out of sight of most any customers), that we started to get an inkling of the App Store’s real majesty.”

Yes, it was then, the duo agree, that releasing iLikeCereal!! became a truly magical experience.

“Just as I was laying down to slumber for the night and not a creature was stirring, not even a mouse, I hear that familiar ‘Bwip!’ from Skype, telling me I’ve just been unfortunate enough to receive a message at such late an hour,” related Marroni.

He then discovered it was Galic messaging him to explain that iLikeCereal!! was now no longer buried down the new releases list (at least not on the PC side of the App Store), but was instead the very first listing, with a release date of December 31st, 2009, no less!

“It appeared our intrepid little app learned itself the secrets of time travel and had a bit of fun to our benefit,” continued Marroni.

From here, it was a whirlwind few days of constantly shifting release dates (something the pair attribute to iLikeCereal!!’s merging timelines and uncanny powers of temporal manipulation and perhaps even a dash of al-Qaeda—just so as not to rule anything out), with, for about an entire day, probably, iLikeCereal!! being the first listing in the entertainment category’s new releases section on both the App Store’s PC and iPhone fronts.

It was during this heady 24 hours or so at the top of the new releases list that the pair begin to let their heads fill with ridiculous fantasies of actually being able to make a living at independent development.

“I thought I might even buy me a PSP,” said Marroni. “Maybe even one of them newfangled Go’s—who needs an UMD drive when you’ve got high rent App Store real estate!”

“I was going to to pay the rent and get something to eat,” said Galic. “I’m actually pretty hungry, right now.”

It wasn’t until another day or so went by and the pair failed to find iLikeCereal!! listed in the Top 100 Entertainment Apps section that they knew they were in trouble and decided to actually check their sales figures.

“And that’s when it hit,” Marroni began.

After calculating that the royalties they earned would be enough for only the cheapest and most vile of malt liquors and Marroni’s girlfriend saying that he’d have to sell at least 30 copies before she’d let him touch her again, the devastation fully sank in.

“In some countries, I believe we’d be legally obligated to commit seppuku right now and/or sent to debtor’s prison–we don’t even owe any debts!!!!1111,” explained Marroni.

“I’d really just like to be able to upgrade to a 3GS,” concurred Galic.

As bad as it is, the pair are, as ever, in it to win it and are sure that a simple featuring by Apple in that holy of holies, the App Store’s Featured section, is all that’s needed to cure what ails the pretty fun and mostly good value, iLikeCereal!!.

“I have it on good authority from a veteran producer that the code word to get Apple to feature us is ‘tough’ and ‘essential’,” said Marroni.

“Yes, we believe this code word will be sufficient for us to get featured,” agreed Galic, before slitting the throat of a freshly procured chicken and chanting ‘necronomicon’ something or other, in an otherworldly tongue.

“It’s cool, though, because we’ve got our magnum opus and first game, iBailout!! (a new-school, action arcade bonanza where players assume the role of the Federal Reserve—really, truly), being published by the fine folks at Hands-On Mobile (who had absolutely nothing to do with this press release—honest) coming to the iPhone any day now,” said Marroni.

“Yeah, I think it’s only going on week seven or eight since we submitted it to Apple for review, too,” said Galic. “Oh, wait. Today’s the 8th, so make that nine.”

So, in the meantime, while the iLikeCereal!! promotional train continues to blaze ever onward and Apple inevitably decides to feature it (and you fine folks reading this magnificent press release get yourselves a copy), thereby giving it a helping hand to the great success that it’s so surely destined to see, Marroni and Galic reflect on their launch experience and what they’ve learned.

Good luck, guys. I hope you sell at least another 26 copies.