It’s only been a few hours since MySpace finally completed and acknowledged its acquisition of imeem. MySpace has now shuttered the streaming music service, which doesn’t come as much of a surprise. But in its haste, MySpace has also pulled the rug out from under any developers tapping into the imeem API, without bothering to give them any warning at all.

One of the biggest apps affected is twt.fm, a mashup between the Twitter and imeem APIs that lets users easily tweet out links to their favorite songs. The app has become quite popular, driving over 1.5 million users to start following the official twt.fm Twitter account. Developer Lee Martin, who built twt.fm, has written an SOS blog post about the change. From Martin’s post:

It’s only fitting that the day after I speak on a panel regarding the creation & usage of APIs and their importance to music innovation, that MySpace shows up to pull one of the best API platforms out from developers’ feet without warning. I created a Twitter/Music app called twt.fm (http://twt.fm) that mashed up the Imeem API with Twitter’s API to allow for music sharing via short links attached to tweets. While it wasn’t the most trafficked of services, I do believe it added a certain value to the Twitter experience and given @twtfm’s 1.5 million followers, I’d like to think others feel the same.

If this is MySpace’s idea of how to run a successful music tech company, they have truly lost their way. Imeem was leagues ahead of their competition (MySpace, iLike, and Lala) in terms of technology and openness. They represented the music business of the future. Now they are a forced hyperlink to a cold, un-innovative, MySpace landing page (http://myspace.com/imeem) making false promises and giving no guidance or help for the developer community they just destroyed. 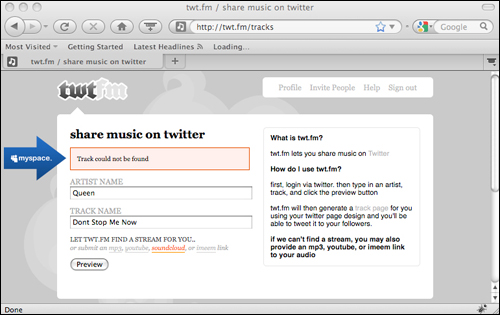 Lee is understandably upset, and I suspect plenty of other developers will have similar complaints. But we’re hearing that the label deals imeem had negotiated have expired, so MySpace may not have had many other options. The death of the API is also related to the way imeem was set up — when imeem proper goes down, so does the API. Given that all of imeem now redirects to MySpace, that would explain why the API is dead.

All of that said, there’s no reason MySpace couldn’t have given developers some sort of warning. Some of these developers rely on these APIs for their businesses, and are now having to fix their services on the fly.