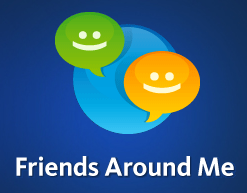 Equintek, an international game development company founded by a group of international investors and entrepreneurs, has invested approximately $1 million in Friends Around Me, a yet-to-launch mobile social networking service with added geo-awareness.

I had a brief chat with one of the startup’s co-founders, Miami-based founder Egor Lavrov, to learn more about the app. I learned only a little about the company’s plans, and much more than I needed to know about Lavrov.

Lavrov, who immigrated to the States after becoming an Internet millionaire in Russia at a young age – he sold his first company at age 16 for just south of $2 million – told me the app will be unique in the U.S. in the way it enables people to acquire new friends, rank users, handle group chat functionality and virtual currency.

That’s fairly vague of course, but the startup aims to launch its first app for iPhone/iPod Touch by the end of this year and on other platforms like Android and BlackBerry in the first half of 2010. According to the fledgling company, the experience of mobile versions of existing social networks and other ventures is simply sub-par (even though Facebook is the highest ranked iPhone app in the App Store), so it’ll be interesting to see what’s so different about what they come up with.

I searched the Web for more information, and found more than I bargained for about Lavrov, who’s quite a colorful character. Check out this bit in a profile of Moscow’s nouveaux riches written back in 2003, for instance:

Lavrov and his 21-year-old wife both write Web logs that focus primarily on their acquisitions, their lifestyle, and their disdain for the poverty in which most Russians live. Lavrov has a $2.5 million custom-designed house outside Moscow, believes that a car should cost no less than $150,000–though a watch can be a little less expensive–and claims that Moscow is the world capital for what he calls “luxury entertainment.”

The man’s personal website boasts pictures of himself in private jets and helicopters and his wife, Russian-Dominican model Lourdes Espinal, while his YouTube account is an utter goldmine of videos of a man showcasing his wealth, driving fancy cars and partying at exclusive night clubs. Last year, he set up a contest called Tattoolizator where he would tattoo the highest bidding company’s logo on his hand (Engadget scored pretty high).

If the video below is any indication of where his mind is at, other mobile social networks have nothing to worry about. Or do they?

CrunchBase Information
Friends Around Me
Information provided by CrunchBase