The design of the Bowers & Wilkins Zeppelin mini is a thing of beauty. Not as much so as the $800, full-size Zeppelin, but that’s fine. It’s sort of like how da Vinci’s Vitruvian Man might not be the Mona Lisa, it’s still a work of art. But as good as it looks, it can be very frustrating to use. It’s not the Zeppelin mini’s fault though; iTunes is to blame. The very first thing I noticed when I took this speaker dock out of the box was that this boy is sexy. Me like. But then again it’s a Bowers & Wilkins product so it better look the part. The iPod touch almost floats above the the concave chrome shelf and can be rotated into landscape mode for Cover Flow.

Even the small remote is classy and functional. It has basic playback controls along with a power button and input switch. The Zeppelin mini itself only has a power button and volume control. It really should have an input button as well. The moral here is don’t lose the tiny remote

Just like the original Zeppelin, this speaker dock is the best in its class. I put it up against the similarly-priced Bose SoundDock Portable and Altec Lansing systems and it clearly had better highs and lows. B&W put the good stuff in this little dock. Actually the sound is pretty good for such a small package. Base comes through nice and full while the highs are crisp. It helps the rear-facing port if the speaker dock is placed in a corner or in front of a wall. But even when placed in the middle of a table, it delivers the goods.

The Zeppelin mini is nearly flawless until iTunes is involved.

This speaker dock is one of the few that can actually sync an iDevice and play back media via a type-A to type-B USB cable. It sounds great on the spec sheet, but syncing an iPod/iPhone often causes the speaker dock to freeze up and become unresponsive. Even when if iTunes is closed and the iPod is removed, most of the time the Zeppelin mini will need to be power cycled.

If iTunes doesn’t see the iPod though, everything works as advertised. You can easily switch the audio on the Zeppelin mini between playing back the iPod or media off the computer. But as soon as the iPod pops up in iTunes, everything goes to hell.

I’m torn here. I love the B&W Zeppelin mini’s sound and look. I’m even fine with the $400 price tag considering those two factors, but it just doesn’t work well when you try to sync your iDevice. Maybe the function would work better on a Mac than my Windows 7 machine or it’s something that can be resolved with an iTunes update. But I could see myself wanting to throw this thing into a wall if it was my main iPod syncing dock.

My advice here is to proceed with caution. Obviously the $400 price will turn a lot of people off anyway, but if it doesn’t faze you, buy the dock from a retailer with a good return policy. If it works for you or you don’t mind pulling the power cable after syncing your iPhone, keep it. If you get the urge to smash it like I did a few minutes ago, return it. But keep in mind that at least it sounds great, which is the most important factor when buying an iPod speaker dock anyway. 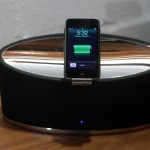 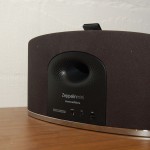