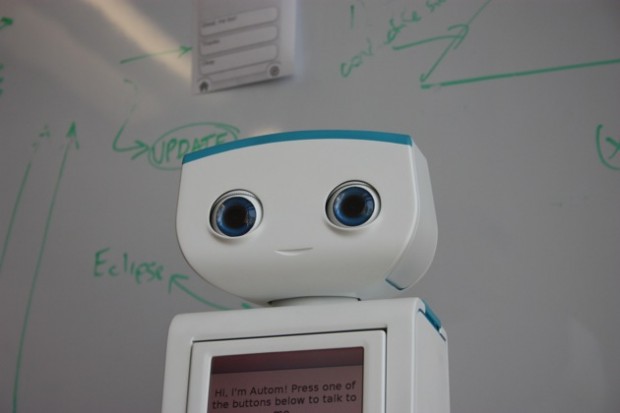 You’ll recall that there was a bit of a buzz a few years ago about a fat-fighting robot named Autom designed to sit on your counter and convince you not to eat that last slice of pizza. Well, the old girl is almost ready for production and should be arriving next Fall.

Autom, in her first incarnation, looked a bit weird and was basically a fancy computer case. Now, however, this thing is like a fat-fighting Furby with expressive eyes and a cute little mouth that definitely wouldn’t ever eat the last slice of pie, unlike me.

The device works fairly well – I saw a prototype as well as some mechanical improvements – and apparently people become so attached to little robot friends that they forget that they’re actually on a diet. The retention for the average diet, for example, is three weeks. When Cory Kidd, the CEO of Intuitive Automata and creator of Autom gave the robot to dieters he found that they didn’t want to give her up and survived on a diet for eight weeks or more. Clearly we love little robots.

No pricing yet but Kidd explained that there will be a base price for the robot and a subscription price for back end services including monitoring and medical advice. You interact with the robot with a touchscreen but voice activated controls will soon be implemented.

No pricing yet, but look for a beta roll out later next year.