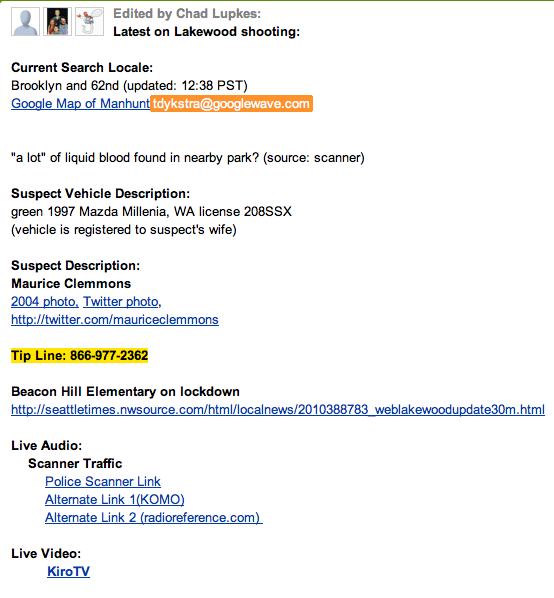 Apparently, like everyone else, the Seattle Times is very interested in trying to figure out what to actually use Google Wave for. But while most are trying to use it for either fun, realtime chats, movie reenactments, or inner-business workings, the Seattle Times have tasked Wave with a larger goal: Catching a killer.

This public Google Wave has been set up to involve the community by offering realtime information that anyone may know about the location of a man suspected of killing four Seattle police officers. A search of a Seattle-area home this morning turned up nothing, but various reports of sightings are coming in, and the Times is opening a Wave to help with the flow of information.

About 45 minutes ago, the Wave was opened with just a few people in it. Already, there are over 100 people in here now communicating quickly with updates. Included are Wave elements with links to police scanner audio, live video footage of the search, a suspect description, and information about local schools on lockdown. It’s actually quite amazing to watch this unfold and get updated before your very eyes.

That said, it will also be a bit overwhelming for many people to follow. In just the first Wave message in the thread, there are four people currently updating things, for example. As one users participating wrote, “distracting/annoying, mostly,” with regard to the live-typing element of Wave. Another simply wrote, “google wave is a mess… back to twitter.”

But others participating are amazed at the rapid flow of information coming in. And plenty are able to follow along. As someone else writes, “That last radio about the fresh blood was pretty chilling… hopefully they are close.”

The fact that this is a public Wave that anyone can join is also both a blessing and a curse. Right now, the comments are pretty much all on-point, but that’s only because many people on the web still don’t know about, or have access to Wave yet. If they did, undoubtedly forums like this would turn into a mess of spam. That’s something Google has to think very seriously about for Wave going forward.

Still, a use case like this is very interesting. A manhunt is all about gathering information. Could there be misinformation? Of course, but there could be on tip lines as well. If a police department had someone watching this Wave (I’m not sure if that’s the case right now), they could do their best to attempt to filter the good information from the bad. Something like this could also be potentially useful for a missing child.

Of course, for all of these types of cases, a solid mobile interface may be better than someone sitting at their computer using Wave. Presumably, the best tips will come from someone who is out and about and sees the suspect. 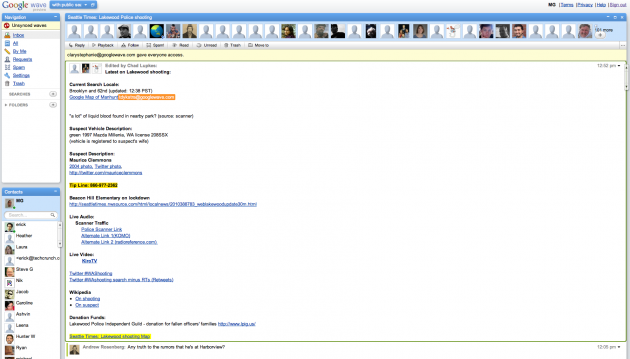