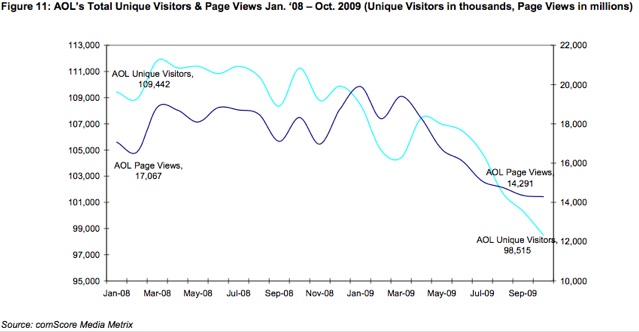 AOL may be brushing up its brand image in preparation for its spin-off IPO in December, but brushing up its underlying business will take a little longer. Barclays analyst Douglas Anmuth released a report on AOL today complete with an earnings and revenue model going out to 2014 (see below). He projects absolutely no growth in revenues over the next five years, and only a one-time bump in profits in 2011, due to cutting one third of its current labor costs, before declines set in again.

In other words, investors who buy AOL stock will do so because it is a cost-cutting and turnaround story not a growth story, and that will determine what kinds of investors will buy the stock.  Anmuth outlines some of the key factors which investors should be paying attention to.

Since all existing Time Warner shareholders will become shareholders of AOL, if a lot of them decide to dump their shares that would create downward pressure on the stock. But Anmuth feels that a fair valuation is $35 to $39 a share, giving AOL a market capitalization between $3.8 billion and $4.2 billion. As AOL goes through its layoffs and other cost-cutting, those measures should help its free cash flow by eliminating about $300 million in annual expenses.

However, AOL cannot cut its way to prosperity. The cuts will buy CEO Tim Armstrong some time to put his new content strategy into place and boost display ad revenues.

Even here, though, AOL is fighting against a downward trend (see chart above). Display ads are driven by pageviews, which are down 22 percent year-over-year across AOL’s sites to 14.3 billion. Unique U.S. visitors to AOL sites are down 11.5 percent from a year ago to 98.5 million people.

AOL also runs display ads across other sites, of course, but is able to charge a premium for its own audience. The core of that audience still comes from its 5.4 million access subscribers, who are declining but still account for about 60 percent of AOL’s EBITDA (earnings before income taxes, depreciation, and amortization). They are also AOL’s most valuable audience in terms of advertising, which explains why Armstrong felt it was necessary to hold onto the access business as long as possible.

Armstrong needs to renegotiate that deal and play Google off of Bing, which might end up with the business and pay AOL a higher revenue-share than the 88 percent it will be paying Yahoo through it search deal still awaiting approval. The problem for AOL is that its overall share of searches, while still a significant 3 percent in the U.S., is less than half what it was three years ago, and keeps going down. 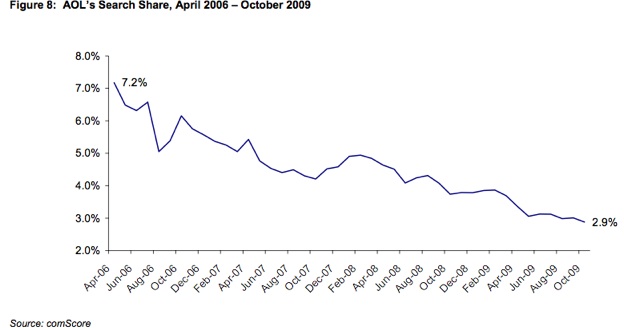 That leaves Armstrong with getting display ad revenues back on track. Anmuth forecasts that AOL’s display ad revenue growth will lag the industry’s recovery until 2012, remaining essentially flat next year and then growing a tepid 3 to 5 percent annually after that. Fortunately, selling ads is what Armstrong does best, so he might surprise investors on the upside there. But as these numbers make clear, it is going to be a tough slog. 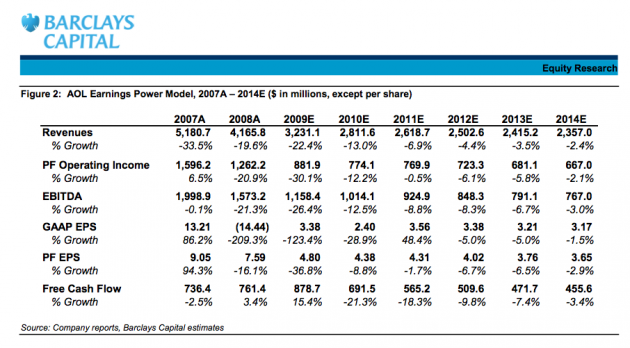 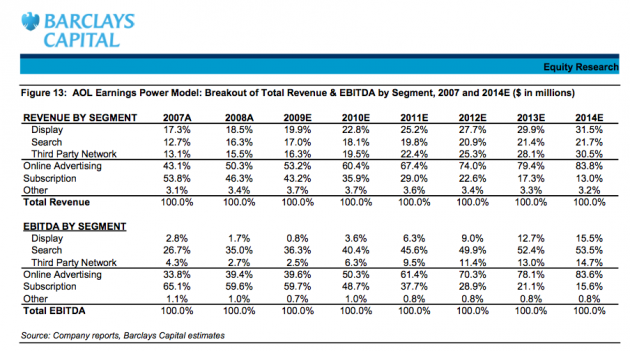