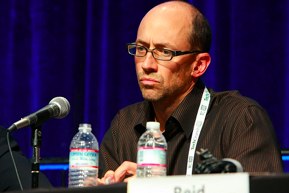 Twitter has apparently come across the Holy Grail of advertising, and it’s coming soon. Today during his interview at the RealTime CrunchUp, Twitter COO Dick Costolo told the audience a bit about the company’s upcoming advertising business. Costolo was vague on the details, but he did make some promises: “It will be fascinating. Non-traditional. And people will love it… It’s going to be really cool.”

Costolo didn’t divulge many more details, though he did mention that it wouldn’t be tied into the site’s retweet feature. When TC editor Michael Arrington tried to clarify by asking if the ads would be integrated into the Tweet stream, Costolo said that “he didn’t say the ads would be mixed in with tweets”. But he didn’t say they wouldn’t, either.

Costolo closed out the topic by saying that the message he wants to send is that “Twitter will have an advertising business, ready in the near future, and available to partners.”