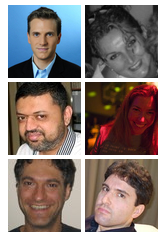 Rich DeMuro (formerly of CNET), Lidija Davis (formerly of ReadWriteWeb) and Mahendra Palsule (a former IT project manager) all join McCarthy to make up the editorial staff for Techmeme. Rivera notes that this team means they basically have human eyes watching for the best tech news 24 hours a day now. This allows Rivera and his fellow programmer, Omer Horvitz to keep the backend and the algorithm rolling.

When Rivera announced the addition of a human editor last year, it caused some controversy. Many people believed that only using a set of algorithms for surfacing news was better because it would take out much of the bias that a human might introduce to the system. But Rivera believes this curation is an integral part of the process to help with fast breaking news and to better filter out spam and old news being re-reported.

The result is a site that seems to be head and shoulders above other tech new aggregators, including Google News, which is quite bad. Maybe we’re a bit biased, since we sit atop Techmeme’s Leaderboard, but the other praise Techmeme has gotten throughout the years doesn’t lie (see the BlurbLog on the side of Rivera’s blog post).

Techmeme is also clearly Twitter-crazy now. Several months ago they added a way to tip stories to the site using the “tip @techmeme” syntax in tweets. That continues to be a valuable part of the site. Today, Rivera is highlight a Techmeme Twitter team list as well.