Most startups have about a billion things to worry about. For many of them, this includes execution of their business model. With online ad networks depressed, increasingly, a number of those companies are starting to explore subscription-based models. But there are a dozen reasons why that can be a pain. Enter Recurly.

Recurly, which is a startup itself, is entering private beta today. The core idea behind the service is simple: To make it simple for startups to be able to offer subscription-based services as an option. They provide an easy-to-use system with a nice user interace and good analytics that lays on top of the dealings that must be done between a payment gateway (such as Authorize.NET) and the startup.

There are a number of other services that offer such functionality but Recurly believes it can differentiate itself in two key ways. First, they do not get paid until you get paid. There are no hidden or monthly fees here. Recurly takes a percentage of each transaction. These total anywhere from 1 to 3 percent depending on volume. But it also doesn’t take the money each time you make a sale, instead it collects the money at the end of each month when the sales are done.

Recurly’s other big selling point is the ability to offer customers a way to easily upgrade or downgrade service plans. What this means is that if an end user decides they want to switch to a lower-tier pricing structure for a service, Recurly can handle that seamlessly. While we may not think that is that big of a deal, it’s a huge headache on the backend for most companies to deal with, according to co-founder Isaac Hall.

And “seamless’ is probably the key word for everything Recurly is trying to do. If you’re a very young startup and don’t even want to deal with APIs, you can come to the site and set up a payment form widget in a few steps, for example. Or maybe your site requires a bit more customization. There are APIs available to you that still hook into Recurly’s system and give you the same kind of data and analytics that you would get with the simple widget. 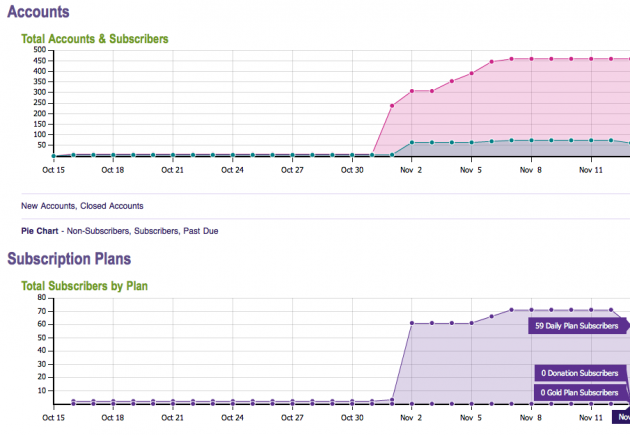 So who is the main target? Primarily SaaS clients, co-founder Tim Van Loan tells us. He thinks this is a particularly exciting time for them, and really all sites that want to use a “freemium” business model. And realizing the so-called “app economy” is currently exploding, he sees that area in Recurly’s future plans as well.

Of course, as I said, there is plenty of competition. One of the big players is Zuora. But for many young startups, they’re offering is too complex. And more importantly, it’s also expensive. A closer competitor may be CheddarGetter, a startup that launched out of the incubator SproutBox back in August. There are a number of similarities between the two, but the key difference is that while CheddarGetter charges a flat-fee (starting at $39 a month, but goes up as you grow), Recurly opts to use the transaction fees (which also rise as you grow). It’s simply two different ways of doing things. Recurly also says it is more enterprise-focused.

Another thing to watch for is what PayPal is now doing with its own APIs. But again, Hall is sure that the easy upgrade/downgrade type options are something that Recurly can offer that others won’t be able to easily match. Plus, he notes that they work with PayPal as one of the payment gateway options.

Up until now, Recurly has been in a very small closed alpha test with a handful of customers. Today marks the launch of their slightly more open, but still closed beta.

Recurly is also announcing that David Samuel, the co-founder of Freestyle Capital, and founder of Spinner and Crackle, will be joining their board of advisors.