San Francisco-based Klout is no stranger to measuring influence on the Social Web. The company launched at SXSW Interactive 2009 to help Twitter users discover the voices that the world listens to (on Twitter anyway). Essentially, Klout measures influence at the topical level, sorting individuals who demonstrate the ability to drive action within respective social graphs when discussing particular subjects.

Today, Klout is announcing its most significant release to date. In addition to measuring authority on Twitter, the company is releasing a new, intelligent Twitter List engine that identifies and ranks the top 25 influencers for any topic of interest and produces a new, qualified, and ranked list as a result.

Measuring individual influence in Social Media is as coveted as it is elusive. While many tools claim to calculate authority, it is the definition of influence that requires clarification in order to grasp the relevance and differences of existing tools and services.

For the sake keeping this discussion on track, let’s define influence. According to Merriam-Webster, influence is having the power or capacity to create an effect.

For example, here’s list of the most influential people covering Zynga: 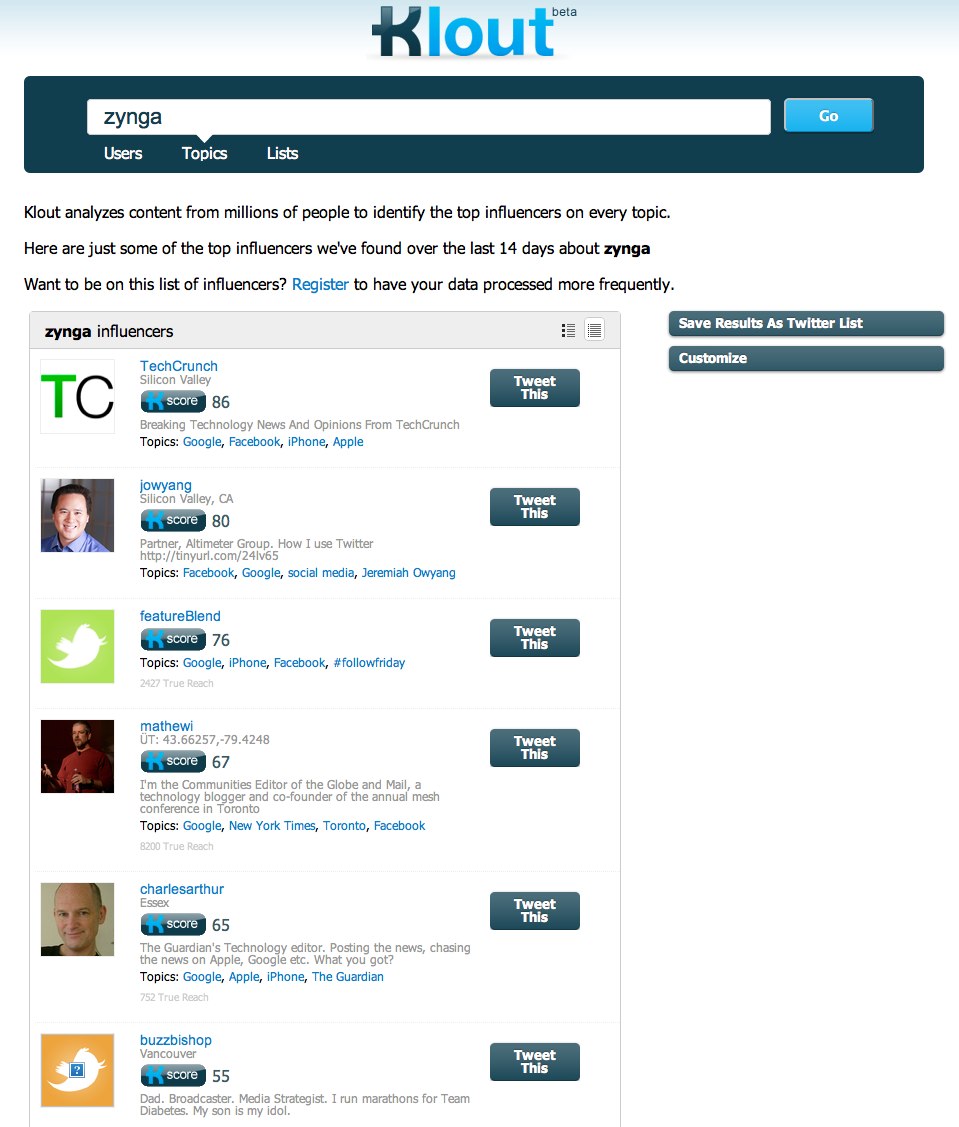 Prior to the official release of Lists, Twitter provided Klout with early access to its List APIs. As such, Klout was able to immediately address one of the early frustrations with Lists—the ability to modify a list started by someone else without having to recreate it. The new system now adds the means to introduce any list into Klout’s analysis engine and instantly view the analytics of each person on each list. Users can then either follow that list as is or customize it using Klout’s topical search and ranking feature to ensure that the list is inclusive of all necessary authorities.

Klout’s ability to add context to a person’s influence is critical for businesses that want to leverage influencers in spreading the word about their companies or products.

Klout’s algorithm involves three sophisticated stages of semantic calculation. The first, described as “True Reach,” measures influence between each and every relationship, evaluating the engaged audience versus total audience.

The service also employs a secondary metric known as “Amplification Probability,” which documents the likelihood of a specific tweet spreading beyond the primary network through retweets as well as generating a response from the immediate audience. The service then examines the percentage of actual mentions or retweets shared by a particular audience as well as the percentage of the originating messages generated by a user’s actions.

Finally, Klout factors the “Network Value,” which measures the influence of those individuals who follow the original user and their propensity for sharing their content, which contributes to the first person’s overall authority.

In general, Klout’s scores place a significant emphasis on the number of clicks a person drives through the links they share on Twitter, thus truly measuring actions associated with each update.

Twitter Lists impact not only influence, but also create an opportunity for a new layer of earned authority. Whether or not someone inspires measurable actions directly, the creation of highly accurate and meaningful lists is significant and also helpful to the Twitter community. The ability to identify and assemble proven authorities on relevant subjects allow followers to stay connected to verifiable and trustworthy sources and the voices, information and trends that in turn influence their activity. More importantly, Klout empowers followers to further modify lists to not only track activity, but also determine opportunities for future engagement and behavior tracking.

After all, influence is not in the eye of the beholder, it is in the ability to inspire action and also measure its effects.