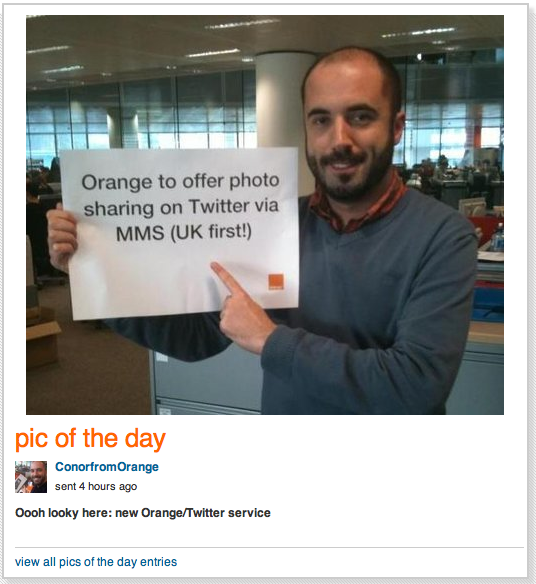 Since Twitter’s inception, SMS (text messages) has been an important and popular way to use the service. For a while last year, it looked like that functionality was slowly going extinct as at one point, only the U.S. and India still had it enabled due to carrier fees. But this year, behind Twitter’s head of mobile, Kevin Thau, SMS has come back with a vengeance, restoring it in places like the UK, and striking new deals in India and Indonesia. And today brings the first of a new type of mobile deal: MMS support for Twitter in the UK.

The deal, announced on the Twitter blog by Thau, allows Orange UK Twitter users to send picture messages to a number (86444) to be posted to their tweet streams. The reason this works is because Orange UK runs a photo site called Snapshot, which will host the pictures and tweet out a link to them automatically.

Twitter notes that it is not charging anything extra for this service, and it should work just like SMS does — which is to say that standard carrier rates still apply for these messages. Still, it’s a pretty sweet deal to bring something new to UK Twitter users first. Hopefully something like this can be worked out in the rest of the world too, but seeing as it took AT&T several months to get MMS just working on the iPhone, I wouldn’t count on it.

It’s also worth noting that non-Orange UK customers can still use SMS for Twitter through Vodafone, O2, and, of course, Orange.