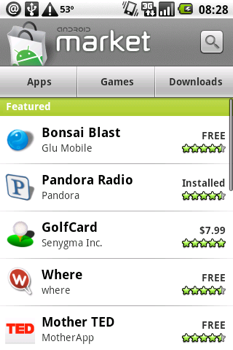 I’ve spent the last week throughly enjoying my new Droid, and while I’ve come across some problems, most of my issues have simply been with the fact that Android does things differently than the iPhone — the transition just takes some getting used to. But there’s one big issue that needs far more than a UI tweak: Android Market. If there was a theme common to nearly every Droid review, it was that Android’s app selection just doesn’t cut it compared to the iPhone. I think that consensus is only half the story. These reviewers are finding that Android has a weaker selection of applications than the iPhone not just because some of their favorite apps aren’t there, but because actually browsing the Market just isn’t as enjoyable as what Apple’s iTunes offers. If Android’s Market’s perception as a poor man’s App Store is going to change, this experience needs to improve.

Currently, all Android Market browsing and transactions are done through an application that comes with the phone. This mobile application used to be pretty bad (it didn’t even offer screenshots of the apps), but was finally overhauled in September to be more competitive with the iPhone’s mobile version of the App Store. The new version is a big improvement, but browsing the store from the phone isn’t exactly a good time — you can only see a few apps at once, so scrolling through various lists gets tedious.

Contrast that with the App Store that’s integrated into Apple’s iTunes. Using iTunes to download new applications isn’t just something people do when they need an app to accomplish a certain task. It’s something they do for fun. Clicking through various top apps exposes plenty of high quality games, apps from popular sites like Yelp, and even the occasional productivity tool. It’s all very fast too — you can easily download fifteen new apps in a single browsing session without breaking a sweat.

Android doesn’t have anything close to that. The official Android Market website (pictured below) is a total joke. It shows a list of some of the top apps from its Paid and Free sections, along with a handful of screenshots. It doesn’t even have a full listing of the apps available, or any kind of search feature (as an aside, the entire Android site looks terrible — type in “Android” into Google, and this homepage is the first result). Yes, there are more comprehensive third-party listings, but there’s no way to download apps to your device without looking them up from your phone. 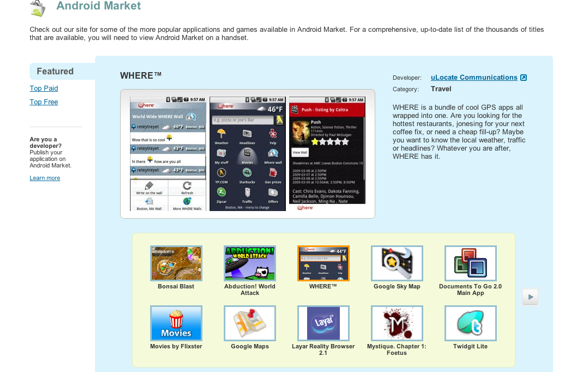 There’s an answer to this, and it’s one that’s right up Google’s alley: Google should rework the Android Market site into a full-fledged AJAXy web app, hopefully with the input of some talented designers. From a functionality standpoint the new Market should be a fairly blatant ripoff of Apple’s App Store on iTunes, with Top App lists, search, ratings, and so on (though there’s plenty of room for Google to improve on application discovery). Users would log in using their Google accounts, and use Google Checkout for payments. Next to every app listing would be a ‘Download’ or ‘Buy’ button. Clicking that would then send a notification to your phone, alerting you that you had outstanding downloads that could be sent straight to your device at your leisure. Large applications would require a Wi-Fi connection to download. Your Android phone is already tied to your Google account anyway, so the entire experience would be seamless.

Of course, there’s the argument that most people don’t buy mobile apps from their desktop anyway — AdMob recently conducted a survey(PDF) that found that over 90% of users download their iPhone apps Over-The-Air (i.e. they’re downloaded directly to the phone) rather than through an iTunes sync. That number sounds high to me, but it’s one that Google shouldn’t pay much attention to for a few reasons. For one, syncing with iTunes is a pain. Yes, Apple has made the process about as easy as it could given the bevy of options it has to include, but between the backing up, nebulous ‘Syncing’ messages, lengthy transfers from PC to iPhone and vice versa, it’s just a lot easier to download straight to your phone.

A cloud based push solution wouldn’t have those syncing issues — you’d be able to purchase apps from just about any computer connected to the Internet, and the only downtime required would be the time needed to actually download the app from Google’s servers. And even if the bulk of purchases would still be done directly from handsets, that doesn’t make a full fledged Android Market experience on the desktop any less important. Android Market is still very much the underdog to Apple’s App Store, and consumers considering an Android handset are likely turning to the web to scope out the applications available on Android to see how they compare to the App Store. Right now, Android fails that test.

Done properly, this setup would likely see the number of apps downloaded increase, as would the number of paid purchases (entering a credit card number on a computer is far easier than on a phone). And that would bring more developers to the platform, boosting the number of quality apps available. Of course, Android has a few other problems to worry about — some developers complain about the inability to install applications on a phone’s SD card, and there’s always the problems involved with developing for multiple devices running different versions of the OS. But turning the Market into something users can actually browse from their PCs is a good start.

Oh, and don’t be surprised if Apple adopts their own web based store some time in the future — they’re already experimenting with ‘iTunes Preview’ for music and video content.