You may not have noticed it, but YouTube is evolving. Unlike sites like Facebook, where even a subtle change in a header’s rounding gets noticed, YouTube has so much going on that it’s often easy to miss one of the site’s new features. But they’re there, and more are coming soon. Earlier this week the YouTube team invited me over to talk about how the video portal is approaching its role as an inherently social site, and what it’s doing to help surface videos that users will find interesting from the oceans of content that’s uploaded every day.

YouTube PM Brian Glick describes YouTube’s social trends with three F’s: Find, Follow, and Feed. The first two are fairly self explanatory. Find refers to the process by which you find people on the site that you may already know or are interested in, whose activity you can then Follow through the site’s subscriptions (you can granularly control which items you’d like to be alerted to, like Subscriptions, Favorited items, or new video uploads). Finally there’s Feed, which should really be called Share. The idea is that after you’ve been presented with content by YouTube’s Find and Follow features, you in turn are going to share that content yourself, which lets the cycle begin anew with everyone that is following you. 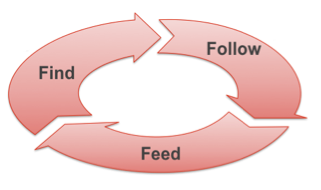 Glick, along with YouTube’s Director of Product Management Hunter Walk, then outlined some of the things the site is doing to actually faciliate the circular chart above. Most of the features they told me about have already been rolled out, albeit with little fanfare, so you may not realize they were there. In June the site started allowing users to syndicate their video uploads directly to Twitter, Facebook, and Google Reader. That may not sound like a huge deal since just about every other media sharing site has let you do it for awhile, but it has had a big impact: YouTube says that every AutoShared tweet yields an average of seven new YouTube sessions. There are over 1 million people who are currently using the auto-sharing, and you can expect that number to rise, especially if YouTube starts pushing it more (and they probably will given its impact on traffic). One other interesting stat: YouTube is the second most tweeted about brand, after Twitter itself.

The site is also starting a push to get people to start subscribing and following their friends on YouTube (up until now YouTube’s account structure has been oddly set up and failed to tap into the social graph established by Gmail). That changed last month, when the site started rolling out a Friend Suggest feature that prompts you to start following your Gmail friends who are on YouTube. Since October, 1 million different people have made at least 1 subscription via the Friend Finder suggestions.

Aside from the site’s sharing features, Glick and Walk also talked about the the challenge of helping curate compelling content for users. Walk says that the average YouTube user spends around 15 minutes per day on the site, while they spend multiple hours watching their TV. Part of that discrepancy lies in the fact that YouTube involves some work on the user’s part — you can’t really just sit in front of the site and let it show you stuff (though there are a few startups trying to do that). Now YouTube is trying to leverage the site’s increasingly emphasized social features to curate this content, first through widgets on the homepage like the Feed and eventually through other means. Walk talked about a feature that might show you “things you missed in the last 24 hours”, which sounds a bit like Facebook’s News Feed for video. 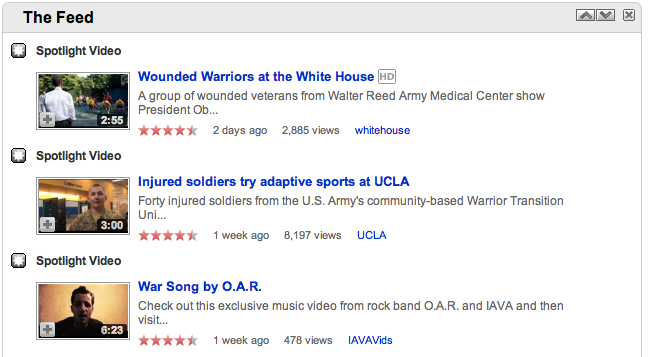 The curation problem may also lead to YouTube deploying some sort of reward system for users who stumble across content early on its lifespan and help it become a viral hit. Whether this would take the form of a badge system or something else entirely seems up in the air — at this point it sounds like such a system is still early on its its development, but it’s clearly an idea that’s being floated around the YouTube offices.

Walk and Glick also pointed out that YouTube doesn’t have to rely exclusively on actions that take place on YouTube itself to find interesting content, as its video embeds can be found on countless sites across the web. Because YouTube knows where a given video is embedded, and, thanks to Google data, what kind of site that is, it can do this quite efficiently. For example, if a video that was embedded on ESPN’s website is receiving a high number of views, there’s a good chance that it will appeal to sports fans on YouTube. YouTube is actually looking to reward some of the more prominent content sharers with a new “As Seen On” widget — if your site is responsible for driving a high number of views to a certain video, YouTube may highlight it on one of its topic pages (the screenshot below appeared in YouTube’s ‘News’ section). The sites shown in the widget are determined by an algorithm.

YouTube still has a long ways to go on both the social and curation fronts — I can honestly say that I’ve never really interacted with many of my friends on YouTube through subscriptions, and I know many people who are the same way. But there is still a lot of low hanging fruit for YouTube to take advantage of. Along with its Gmail integration, YouTube may consider letting people tap into Facebook Connect to identify Facebook friends who are also on YouTube (given the Google/Facebook semi-rivalry that may be a long shot, but YouTube has already implemented a more limited version of Connect).