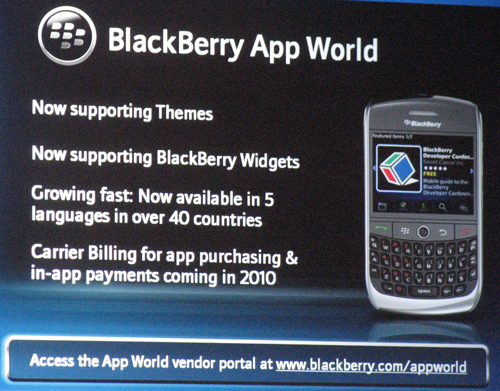 Good news, everyone! RIM has used the keynote of their BlackBerry Developer Conference to drop the good word on a fairly important topic: Carrier billing is coming to the BlackBerry App World in 2010.

Carrier billing is quite certainly one of the most important — yet mostly unmentioned — aspect of any App Store’s success. Once a user can just charge an app purchase to their phone bill, a 99c app becomes an impulse buy. As it currently stands, any purchases made through Blappworld require Paypal credentials – and while that’s by no means a monumental obstacle, it requires just enough effort to trigger that little “Eh, not worth it” thought in the potential buyer’s brain. In other words, less hassle = more sales.

RIM also announced that developers could now use Blappworld to sell BlackBerry themes (graphical interface skins), along with the web-based Apps that RIM (confusingly) refers to as “Widgets”.