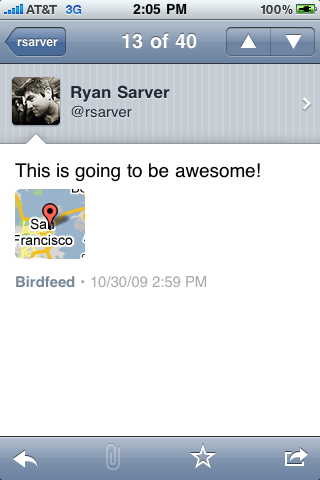 On the verge of rolling out its new geolocation feature, Twitter is thinking ahead. One potentially powerful use for it will be to showcase trending topics happening in specific places. The overall Trending Topic area has long been getting out of control with spam (which Twitter is now working to clean up), but location-specific trends could be very interesting. And Twitter clearly knows this as it has announced a new feature for third-party developers to use: Trends API.

In a post on its API announcement Google Group, Platform team member Raffi Krikorian writes that at least at first, this will only be open to specific locations in the world. For example, he cites San Francisco and London as two potential places that will be serviced by this. São Paulo is another mentioned in a tweet. Krikorian also notes that:

At a high level, there will be two new endpoints:

Twitter is using Yahoo’s Where on Earth IDs (WOEIDs) to tag the locations they have information for. Doing so gives them a way to use IDs rather than language-specific names for places. More on Yahoo’s GeoPlanet (which this is a part of) here.

It would also seem that at first these trends will only be available for real-time data. That is to say that there will not be daily and weekly data for location-based trends, Krikorian notes. (Twitter showcases these on its main page.) He goes on to say that may come in the future.

Find out more on Twitter’s API wiki here and here.