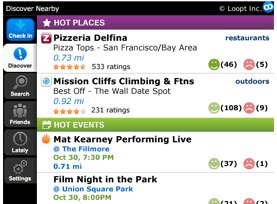 As a blackberry user, I generally feel a little left out of of the location-based apps world. FourSquare only provides a mobile site for BlackBerry users (but has an Android app). BrightKite has an innovative BlackBerry app, but it’s not nearly as feature-rich as its sister iPhone app. Today, location-based social network Loopt is making a major upgrade to its BlackBerry app.

The new version of the app has one significant feature that even trumps the iPhone app: background location updating. So even when the app isn’t running, your location will be updated in real-time in the background. Loopt’s new app also pulls in local content about restaurants, bars and events from Zagat, Citysearch and the Loopt community, creating a local search engine within the app.And you can rate places you visit as well from the app.

The app is also integrated with Pulse, which is Loopt’s new feature that recommends hot places, hot events, and lets you know what your friends are up to. As we wrote about previously, Pulse is a direct reaction to competitors like Foursquare and Gowalla which are built around that very idea. The feature will also be part of the Loopt 2.0 iPhone app, which should be released shortly.

Loopt for the BlackBerry will also include local coupons from retailers nearby. As we’ve previously covered, location is compelling tool for business models involving things like coupons. Loopt is taking full advantage of this and has struck deals with partners to serve up virtual coupons when users of Loopt are nearby a restaurant. And you can share your updates and location with friends, see where your friends are on maps, view and comment on their updates. Loopt is available for free for the BlackBerry Curve 8900, BlackBerry Bold 9000, and the BlackBerry Tour smartphones on RIM’s App World.

The whole background location update for the BlackBerry is a huge plus since the iPhone does not allow third party apps to run in the background. Loopt recently launched new feature that allows you to get around this obstacle by pinging your phone to get your location with the help of the carrier. But that service costs extra money, which is a huge barrier. Stalqer, a new location based social network built around Facebook, also has found a way to run its app in the background.