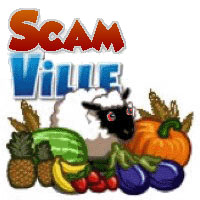 Just five days ago Zynga CEO Mark Pincus said mobile subscriptions, among other scammy offers, would be removed from Zynga’s popular Facebook and MySpace games. “We have also removed all mobile ads until we see any that offer clear user value,” he said.

So we were surprised yesterday to see a screen shot clearly showing a mobile subscription ad in a post on InsideSocialGames about the launch of a new Zynga game, FishVille.

I went to the game to check myself, but those mobile ads weren’t there. I assumed they had quickly been taken down, or there was some other reasonable explanation.

They weren’t taken down though. Or rather, they were, but just for me. Other users were still seeing the same mobile ads. And the filtering was clearly directed at me, since I logged in on the same IP address with a friends account and saw the ads. I held a laptop showing the ads up next to my screen that didn’t show the ads and took a picture: 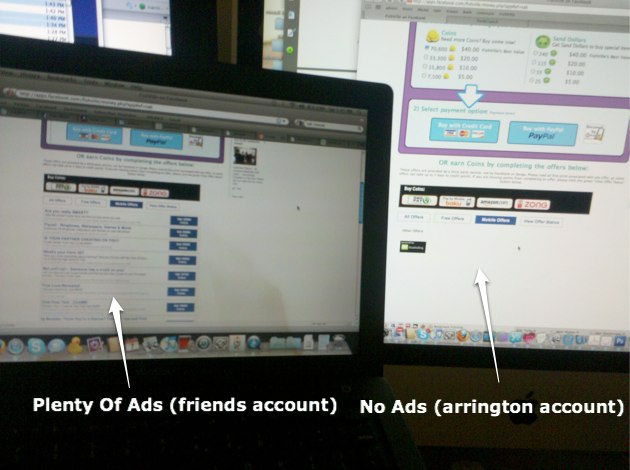 Is Zynga intentionally blocking ads to journalists and bloggers that have criticized them for the practice, while leaving them up for everyone else? More on that in a minute.

The ads, which have now been removed after I emailed Zynga, are exactly the same as before, and they are the main reason I started the whole series of posts on social games – see our ScamVille post and related updates.

These ads clearly violate Facebook’s terms and conditions. They don’t state on the offer page that the user is required to enter into a $10 – $20/month mobile subscription, and there is no opt in by the user before entering in personal information. And they also violate the rules in other minor ways, like having auto-playing video and audio in the ads.

There’s an image at the bottom of the post showing just the mobile offers that were up on Zynga’s games until earlier today when we asked them about this. All of these violate Facebook’s existing terms, and any normal human being would consider them scams. And none of these should be there given Zynga’s promise to take down all mobile offers.

Since most people have never experienced one of these ads to understand just what we’re talking about, I made a video. After ten minutes I had been asked to subscribe to 5 or 6 separate mobile subscriptions, had been asked for my birthday, and had been asked to enter in my email address. Even after all that I hadn’t earned the originally promised coins, and abandoned the effort (getting users to abandon these offers part way through is its own business model, referred to as “breakage”). Here’s the video:

What’s disheartening to me isn’t that Zynga put the mobile ads back up, or even that appear to have selectively blocked me so that I don’t personally see the ads. Their motivations are quite clear. What’s really disappointing is that Facebook, even after promising to enforce their rules, continues to just turn a blind eye to this stuff. I know Facebook hates the negative press, but I am really starting to think that they couldn’t care less about their users getting scammed.

In the last few days the industry really started to make the right moves and I thought this was a problem that would soon be solved. But then I realized that as much users hate being scammed, and as much as the press is willing to put the pressure on (both Time and Newsweek are pointing the finger at Facebook), there may just be too much money at stake for any meaningful self regulation to occur.

Update: From Zynga “We asked all offer provider networks to remove the mobile category. Upon learning today that one provider was still showing 6 ads, we asked them to remove these too. They told us they hadn’t realized this was still in their testing queue and immediately removed them.”

Update 2: DoubleDing, the offer provider in this case, responds to this post and denies any filtering of ads. Full email from the DoubleDing President is here. 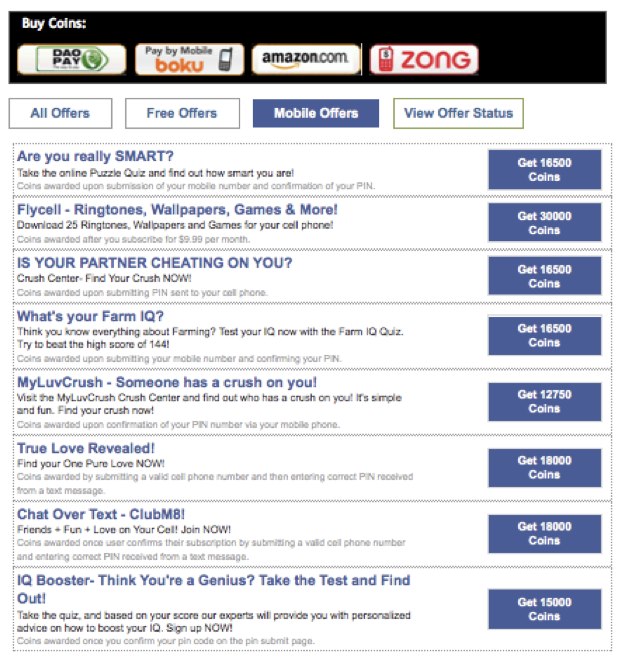