Our series of ScamVille posts on social gaming scams are nearly over. There have been some surprises along the way, like Zynga, RockYou and MySpace making quick policy changes to protect consumers. But we want to end this series with a glimmer of hope, and a proposed way for app developers to make a good living over the long run. All previous posts can be read here (including updates at the bottom).

During our research we spoke to dozens of scam artists, game developers, advertisers and legitimate and illegitimate middlemen. One company was consistently mentioned as being the most above board with their approach to the market – TrialPay. So to end the series, we’ve asked TrialPay CEO Alex Rampell to write a guest post on how he sees the market, and how it can move forward in a healthy way.

TrialPay is an 80 person company company in the payment processing and promotions space that works with over 7500 companies like Skype, McAfee, Match.com, Photobucket, Kmart, 1800Flowers, and Playfish. Alex started TrialPay four years ago after pioneering the use of “alternative payments” in consumer software products and games, and previously co-founded a company that became known as SiteAdvisor.

Alex believes that the recent coverage about the dangers of advertisements and advertising in the social gaming space is a welcome debate that may help save this industry from what this insider sees as the social gaming equivalent of the “tragedy of the commons,” where all constituents – users, advertisers, offer providers, and app developers – could permanently lose. The recent Zynga, RockYou, and MySpace announcements are an encouraging first step, but more needs to happen.

In an efficient ad marketplace, the top keyword usually goes to whoever can spend the most money on it, normalized for conversion. Who can afford to spend the most money? Unfortunately, it’s not always the company with the best product, service, or price; under pure laissez faire advertising, it can be the company that tricks, lies, and steals more pennies out of each customer than any competitor. This often forces ethical competitors to make a very tough choice: roll over and stagnate (or die), or play a similar game. Playing to win means staying microscopically behind the red line or breaking the rules and not getting caught.

Let’s keep that as the backdrop as I tell a sordid story about lead generation on the Internet.

Offers Can Be Done Well and Benefit Everyone

These real examples work very well for all parties, all of them can be and have been extended to social games, and it would be hard to argue that they are not legitimate. The problem is that they are crowded out by less legitimate alternatives that are proliferating today, a theme which Michael nailed in his last post. Incentive marketing can be a disaster if not done right, though, and the “win-win-win” can turn into “lose-lose-lose.”

Two Examples of Getting It Right In Social Gaming

Example Screenshot: Remember Amazon.com’s free shipping if you spend over $25? No such thing as shipping in online games, but Restaurant City, one of the leading Playfish games with over 17M monthly active users has offered customers a free movie ticket to anyone who selects the $39.99 option 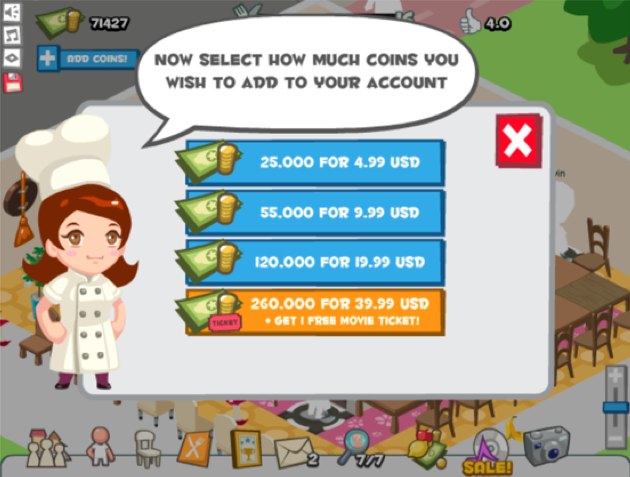 Example Screenshot: PetSociety, Playfish’s most popular title with over 21M monthly active users, enables customers to purchase flowers from FTD during Valentine’s Day and receive 8,000 coins toward their account. 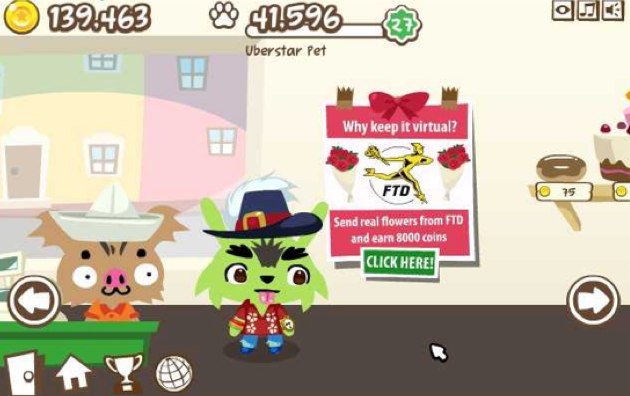 Historically, Offers Have Been Implemented Poorly

Consumers Scamming Advertisers – Cash For Clunkers: Back in the late 90’s and even after the bubble burst, a lot of companies offered you “cash” for signing up for offers (like Blockbuster, Vonage, etc). Netflip (aka MetaReward) scaled to nearly $70M in revenue before being shut down by its acquirer, Experian. The reason? The lead quality was bad – no, atrocious. At one point in 2006, Earthlink was paying $200 to acquire a customer for its moribund dialup business. “Cash back” sites would offer consumers $100 to sign up for a $20/month service, which said consumers would summarily cancel, netting the cash back site a $100 profit and Earthlink a $200 loss. Result: Consumers scammed advertisers, and advertisers ran for the hills, but it took years for this to happen and the ecosystem to devolve.

Advertisers Scamming Consumers – Free iPods: A few years later, and fueled by cheap media, “Free iPods” (often referred to as “Free iPod Scams” and later encompassing “Free [product X]”) grew to over a half billion dollar/year industry. It was a pure breakage model; your iPod would be delivered, but only if you got through dozens of pages of co-registration advertisements and offers. It got scammier and scammier since barriers to entry were low, and whoever scammed customers the most received the most revenue to get more customers. Everyone went along for the ride because every website and ad network benefited in the form of more “free iPod” advertisements. Eventually, the FTC came in. Result: Consumers got scammed, and legitimate advertisers ran for the hills, but this too took years.

Now it’s 2009 and the age of social networking. Replace “free iPod” with “free virtual currency” and see if you can figure out how this story could end. It’s actually worse because every time a consumer signs up for another offer, he or she earns more currency – yet by the 100th offer, the chance of lead quality being high for non-shopping offers (e.g., Gap, BestBuy, Target, etc) is infinitesimal; somebody who immediately signs up for both Netflix and Blockbuster to earn coins will probably be a bad customer for both. Returning to the “tragedy of the commons,” the network (or app developer) with a conscience for quality who won’t let consumers do 100 untargeted offers will simply be out-monetized by the network/developer who will, and that hurts the long term prosperity of everyone.

Many legitimate advertisers have already started to cut their payouts or bail, such that the “scammy” offers yield the highest returns. Many app developers don’t want to run scammy offers but don’t have a choice if they are to stay competitive in another tragedy of the commons.

Where Are the Complaints?

There’s also a large obfuscation layer between the user and the advertiser. It often looks like this:

The offer providers are companies like Offerpal, SuperRewards, DoubleDing, Gambit, Firecue, GratisPay, and to some extent my own TrialPay, and ad networks are companies like Adteractive, CPAStorm, SearchCactus, Gratis Internet, ClickBooth, Affiliate.com, etc. The app developers often rotate different offer providers, and the offer providers often rotate different ad networks, even though the user at the beginning and the advertiser at the end stay constant. This makes it easier for users to scam advertisers, harder for offer providers to correctly track completions (there are more links in the chain to break – many people sign up for offers and are not “credited”), and easier for scammy offers to keep resurfacing such that the game publishers don’t always know what’s going on. It’s the price they pay for higher short term revenue.

Moreover, user complaints are often directed at the advertiser since the offer provider and ad network are relatively invisible in this chain, which is why you’ll hear many app developers and offer providers claim they get no complaints even though scammy offers collectively yield tens of thousands of complaints to various attorneys general, the FTC, and internet message boards. Despite this clever obfuscation, it’s still bad for the game publisher; users have less money to spend directly (since they had a chunk of change “scammed” away), and ill-will is bred towards the game publisher.

To Prevent Further Damage, Here’s What Needs to Happen

It doesn’t have to end this way – there are numerous legitimate forms of incentive marketing (see my initial four examples), but they’re not as profitable on a short term basis as allowing users to scam advertisers 100 times, or allowing advertisers to scam users several times (even the most naïve users get the hint after a few interactions). This has been tough for my company because we’ve felt the only way for us to “win” was not to play the game, and focus on higher quality and sustainability. That’s ok because only a small fraction of our revenue comes from social gaming, so we aren’t desperate to monetize at any cost, but I’d hate to see the industry implode.

So how do we emerge from this sad state of affairs?

The solution is a mixture of both. Having Facebook crack the whip does nothing to solve the problem of users scamming advertisers, which imperils the whole ecosystem. Indeed, we work with companies like McAfee and Skype, assiduously measure our quality because we work directly with the vast majority of our advertisers, and we have seen the tremendous volume (and often abysmal quality) of incentivized social gaming traffic sour some advertisers to the point of throwing the baby out with the proverbial bathwater.

The problem is similar to click fraud in search engine marketing, and the solution is similar:

Advertiser Feedback Loops: Offer providers need to establish direct relationships with advertisers and create a quality feedback loop. The vast majority of our advertising deals are direct, and we insist on feedback loops (did the user “quick cancel” a trial?) so we can eliminate bad sources of traffic. It doesn’t mean that all of our traffic is perfect, but we spend a tremendous of time eliminating the negative externalities, which provide for better unit economics. App developers who care about quality might even want to consider working directly with advertisers, lest they receive the lowest common denominator of payouts from offer providers who don’t focus on quality.

Limits on Offers: There should be strict limits on what users can sign up for – not by law but by rational self-interest, since this will yield more long term revenue. The vast majority of our “alternative payment” business revolves around letting users pay for an item like McAfee VirusScan by transacting with one and only one advertiser of the user’s choice. This increases the quality, which lets advertisers pay us more, and in turn lets us pay McAfee more. Advertisers will pay more if they recognize that fraud is lower and quality is higher, just like with search engine marketing. Multiple offers can work (e.g., retail shopping at different stores) but it’s much more complex in lead generation.

Game Publishers Should Insist on Long-Term Partnerships: Game publishers who think about long term quality (and don’t swap out providers, where the providers don’t swap out networks) will make more long-term money – partially because they won’t burn as many customers, but primarily because quality breeds higher payouts from advertisers.

Let’s hope we can solve the tragedy of the social gaming commons. Virtual currency is a multi-billion dollar industry growing at a massive rate, and reckless short term behavior can threaten an even more prosperous long term future.