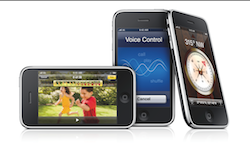 Not that this should surprise anyone, but Apple has sold only 5,000 iPhones since last week when it officially launched. The phrase “officially launched” is key, since people there have been able to buy the iPhone on the gray market for some time now. And it’s a superior phone on the grey market, since the official phone doesn’t have Wi-Fi. That’s right: a smartphone nearly in 2010 that doesn’t have Wi-Fi.

The phone isn’t particularly expensive, but that’s not the issue. The issue is that China Unicom and Apple have released a crippled version of a phone that had already been widely available.

Someone, and I don’t know who, expects Apple to sell as much as 460,000 official iPhone in China per year. Keep in mind that that’s still less than the number of grey market phones, so all of this is sorta silly.