For advertisers on the Web, behavioral targeting is held out as the nirvana they’ve been waiting for: the ability to show ads only to those people most likely to be interested in them based on their past behavior. The growth of this type of ad targeting also raises a host of privacy concerns, but setting those aside for a second, do these ads even work? Do they perform better than regular ads? If they did, you’d expect advertisers to pay more for them and for Website publishers to be flocking to them.

At least for Google, the answer seems to be “No.” According to estimates by Jim Brock, founder of PrivacyChoice, chairman of Attributor, and a former senior VP at Yahoo, only about 25 percent of AdSense sites are serving targeted ads, which Google calls “interest-based advertising.”

Brock comes to this figure by counting the links to Google’s privacy policy, which is a requirement of the program. Google counts 277,000 links, and Yahoo counts 224,000 links, so he splits the difference and divides it by the one million AdSense publishers Google recently disclosed in its latest earnings call to come up with 25 percent. Google actually said there are more than one million AdSense publishers, so the percentage using interest-based advertising is probably lower.

Google started behavioral targeting last March. It tries to determine your interests by placing cookies in your browser and tracking what types of sites you visit. You can see what interest Google has assigned to you and even change your interests by visiting Google’s Ad Preference Manager. You can also opt out of the program entirely.

So why isn’t there a higher adoption of this type of advertising among publishers? One answer could be that they don’t want to wade into controversial waters. But that’s never stopped Websites or advertisers before. If these ads were performing significantly better than regular AdSense ads, there would be a stampede to adopt them more broadly.

Brock suspects Google’s interest-based ads aren’t working so great because Google doesn’t actually know most people’s interests. He’s trying to get some more data on this. You can help him by using this survey tool which lets him count how many people have their interests mapped by Google. So far, based on a very small sample, only one in four do. And of those who can be targeted, the average number of interests is only five, which isn’t a lot.

I guess I’m the exception, because Google has my interests down pat. It shows ten different interests, including technology news, business news, mobile phones, blogging services, advertising, and air travel. Am I really so transparent? 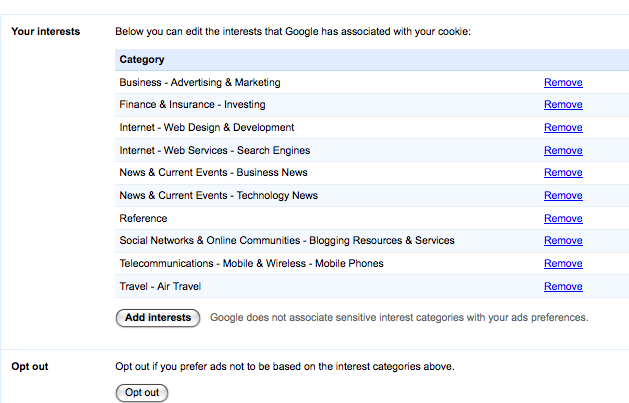